Paradox Beasts are the various beings brought into existence when magic goes dangerously wrong. It’s unclear if they’re created by the magic itself, intruders from other realms of existence, or formed by reality as scar tissue against the damage done. What is clear, however, is that they are dangerous.
Where a paradox beast exists, the basic structure of reality is altered. Causality becomes more shaky, the laws of nature don’t quite apply in the same way. If allowed to remain, their influence will grow, infecting ever greater areas around them with their contagious unreality.
Each paradox beast is unique, and most utterly bizarre in appearance, but there are common motifs. Most are biological-looking, resembling alien life-forms. Often, their anatomy is nonsensical, and outside the aura of altered reality they create their biology wouldn’t be able to sustain life.
It’s impossible to say if they’re intelligent like we are. They don’t talk, and don’t really seem to have tools of their own, and seem to be struggling to cope with the world they find themselves in. It seems that mundane reality is as alien and confusing to them as they are to normal humans. Most go on a blind, baffled rampage on arrival in the real world, unable to properly comprehend what’s going on. A rare few survive, hide and grow used to the world they’re in. They warp the environment around them and grow old and cunning. Perhaps many of the true horrors of the deep earth were once paradox beasts, now acclimatized to this world. Perhaps they have plans that even now are being brought into fruition.
The appearance of a paradox beast is likely to attract the attention of Men In Black and other authorities, who will deal with the outbreak with brutal efficiency. Witnesses are mind-wiped, evidence destroyed. They aren’t demons or devils, but to an ignorant civilian they might as well be.
They shouldn’t exist. Every fibre of your being tells you that.

Creating a Paradox Beast
The first step is to determine how many Hit Dice the paradox beast has. Normally, the total number will be determined by the effect that brought the beast into existence. Otherwise, roll a d12 for it.
Of these hit-dice, some will be flesh and some will be grit. Roll a d10; this is how many dice are flesh dice, the rest are grit. If the result is more than the creature’s total number of hit-dice, then instead the creature has two flesh dice, and the remainder grit. (Obviously, a creature with only one hit dice only has that one dice of flesh). The number of flesh dice the creature has determines it’s size, according to the table below.
The Paradox Beast’s AC has a default value of 12. Its saves are determined by it’s total number of hit-dice, as seen on table XX.
Assuming it doesn’t have any other attacks granted by its features, a paradox beasts attacks once. The to-hit bonus is equal to its number of hit-dice, and the damage depends on its hit-dice, as shown on table XX.
All paradox beasts have certain strengths and weaknesses. If they enter an anti-magic field or similar area where magic is suppressed, they blink out of existence for as long as the field of Antimagic remains in place. If they are hit by Dispel Magic or similar spells, that deals d12 damage to them.

Paradox Beast Forms, Features, and Effects
Each paradox beast has a particular shape that its body takes. Roll a pair of d20s on table XX overleaf to determine what the beast’s basic form is; the first determines the basic shape, and the second gives an adjective that modifies it. The creature’s form and adjectives may modify its basic stats.
After this, determine the paradox beast’s features. These are the unusual organs or special abilities that the creature has.  Roll a few d20s on table XX to generate them. At least one, maybe as many as six. Keep rolling until you’ve got a satisfying amount. If you want to go fully-random with it, roll d6 features.
Lastly, each paradox beast has effects; the way they warp the world around them. Like with features, roll a d20 on table XX to determine what their effect is. Keep rolling until you feel you’ve got a good selection, or just roll up d6 effects. 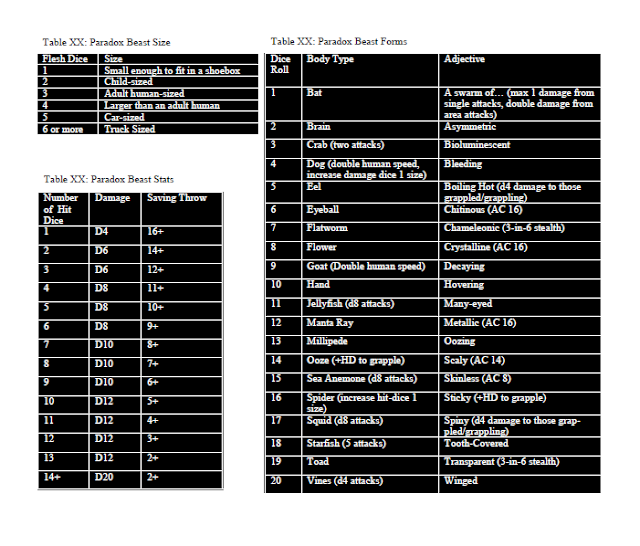 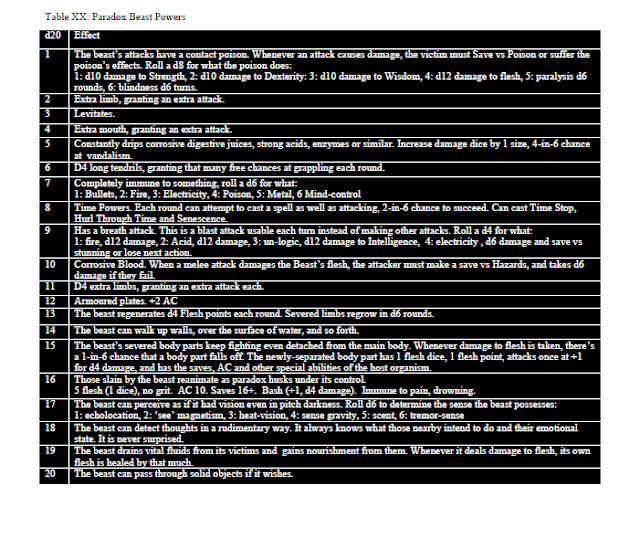 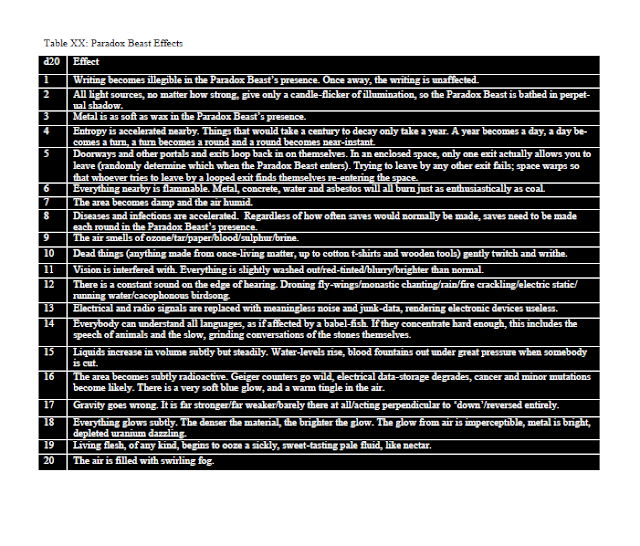 And there you go. Paradox beasts for Esoteric Enterprises, since they aren't in the player book. Have fun!
Posted by Cavegirl at 03:36