In which I talk about the best thing Games Workshop ever made, how it was totally underappreciated, and how to apply some of its ideas to oldschool RPGs.

When I was a kid, I was into Warhammer, which was cool, with its big armies of goblins and skeletons and stuff. However, right about the time I was 12, Games Workshop released Inquisitor.
And Inquisitor, as a game (and particularly for GW) was weird.
To start with, rather than the big armies GW was known for, it was a tiny skirmish (smaller even than something like Mordheim or Necromunda), with 2-5 54mm figures on a side. These figures were unique; you didn't get a generic soldier or anything. Instead, the book gave you a bunch of setting details and then told you to come up with something cool for your characters and stat them yourself, with only a few guidelines on how to do that. And then to convert your own figures; using the miniatures out-of-the-box was rather looked down on.
The basic expectation of play was that you had a GM, and one or more players with their little warband of an imperial inquisitor and his followers, and you'd play through a custom narrative scenario to see what would happen. The game's text was pretty explicit that the point was not to win but to create a cool story from the game. You had characters doing things like disarming bombs, trying to get all the parts to summon a demon... hell White Dwarf literally published a battle report that was mostly both sides talking like adults (well, until an angry third party showed up with a chainsaw).
Oh, and the rules had a bunch of cool stuff with things like realistic injuries, psychological stats, dangerous psychics and so on. But they're less important here.
It's an interesting approach. Don't bother balancing things or trying to make character creation 'fair', just trust the players not to be dickheads and to pick interesting things rather than game-breaking things. Knowing GW's standard model (points allowances and competitive games), their playerbase didn't really know what to make of it. It got a cult following, but GW stopped supporting it after about half a decade.

I really liked it. I'd been into wargaming for a few years already. Inquisitor came into my life at about the same time D&D 3rd edition did, and I'd not really encountered RPGs before then. However, while 3rd kinda turned me off with the vast amounts of prescriptive mechanics and requirements and prerequisites getting in the way of the fun stuff... Inquisitor captured my imagination. Here's the setting. Make something cool. We trust you not to be a dick about it.

So.
What if we took that approach to RPGs? I've read a bunch of games, ranging from the avowedly old-school (I blog about OSR stuff mostly), to the weighty tomes of Vamp and its ilk, to the weird experimental art games like The Mountain Witch and Monsterhearts and so on.
All of them - all of them - have mechanics for character creation. Even in the 'pass the talking stick' story-focussed hippy games, all of the ones I've played require you to fit your character concept into the mechanical constraints of the character gen procedure.
What if this wasn't the case?

Here's how you work it. I will be using OSR games for my examples here, but you can apply it just as well to other games, too.


You do all of this alongside your other players and the GM, you bounce ideas off each other and check in to make sure nobody's PC is vastly stronger/weaker than anybody else's. I'd say level 2-5 is probably your sweet spot for power. Don't worry too much about balance though.
Make characters with strengths and weaknesses and exploitable flaws and potential. Give them an interesting playstyle. Be the amateur game designer you always wanted to be.

So, how is this balanced? There are three things to bear in mind here:
1) you are not trying to win, you're trying to create an interesting character.
2) nobody has to play with you if you're a powergaming dick.
3) if you are being a powergaming dick, then the GM (and to a lesser extent the other players) need to solve that as a social thing by talking about expections like fucking adults.
Like, obviously this is a thing you do if you're all on the same page. If you are playing with somebody who will willfully go against the social contract of the game so they get to feel they 'win' a non-competitive venture, that person is an asshole. Why are you playing with them?

So that's character gen. Now, in play things work basically the same. Follow the normal procedures and methods that you normally would, with a few exceptions.
Find a fun Death & Dismemberment/Critical Wound/Injury table, or something. I put a fun one in WP&WS, I'm putting another fun one in Esoteric Enterprises. WHFRP and the 40kRPGs have some pretty great ones too. Hack the game so that taking damage (or taking enough) damage inflicts a relevant wound on you. Off the top of my head 'any damage roll that does more than [the max on your Hit Die] also inflicts a Wound on you' works.
You do not earn XP. You only advance by Doing Tangible Stuff in game. In D&D, the fighter finds a magic sword, the wizard loots a spellbook, the cleric makes dark pacts with horrible inhuman things they encounter for more spells (if your cleric isn't a boggle-eyed cultist loony worshipping something creepy, it is boring and I will judge you). Maybe you drink from a magic fountain for +1 wisdom. Maybe you eat the heart of a dragon and it grants you DRAGON BLOOD (whatever that does). In vampire the masquerade, there is already a wonderful mechanic for this called Diablarie; playing a sabbat pack who's only mechanical advancement is by diablerizing their enemies would be cool as fuck.
Basically, events in world can make your character weaker or stronger based on what happens to them, but it's in response to specific events; there isn't the expectation that you'll gain levels.
(I have, incidentally, played in a 6-year-long Larp that used that method of character advancement: the only way to get stronger than the standard mortal you started out as was by getting blessed by the gods or doing magic experiments on yourself or being turned into a monster. No XP. No expectation of advancement except for what you did in world. It worked brilliantly).

So, why play this way? A few reasons:
And, yeah. I've never actually played this. It's just a thought experiment that I might institute when I next run a game or I might not (because fiddling with what gives XP as a way to shape PC personalities is a favourite mechanic of mine). Let me know what you think.

Also some of the art for Inquisitor was fucking badass. Look at this shit. 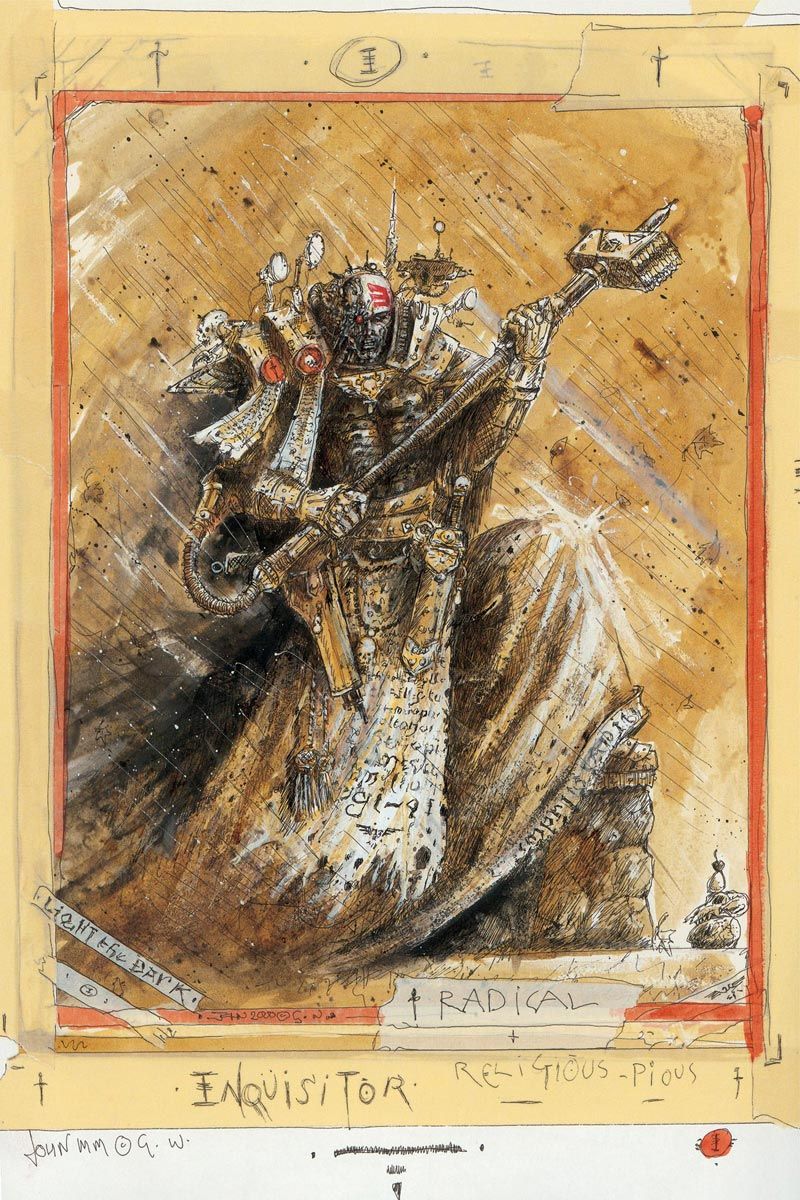 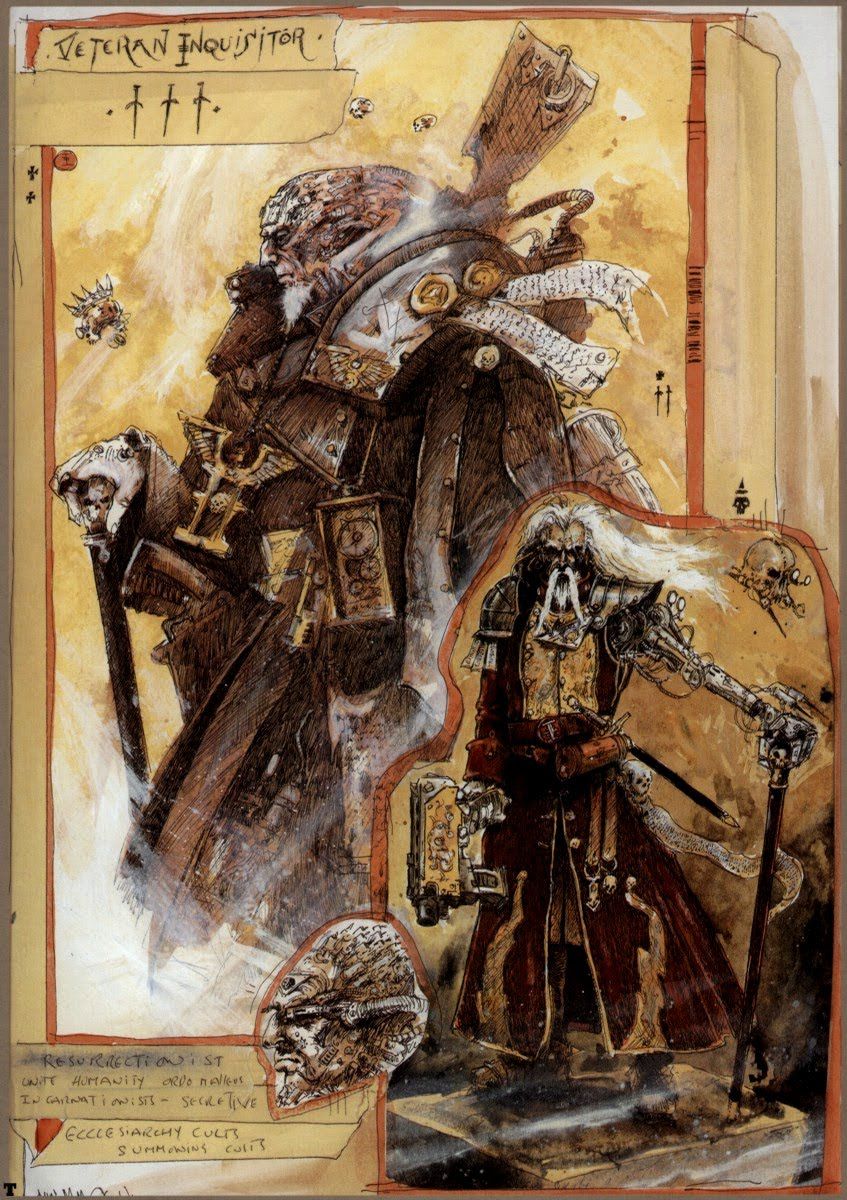 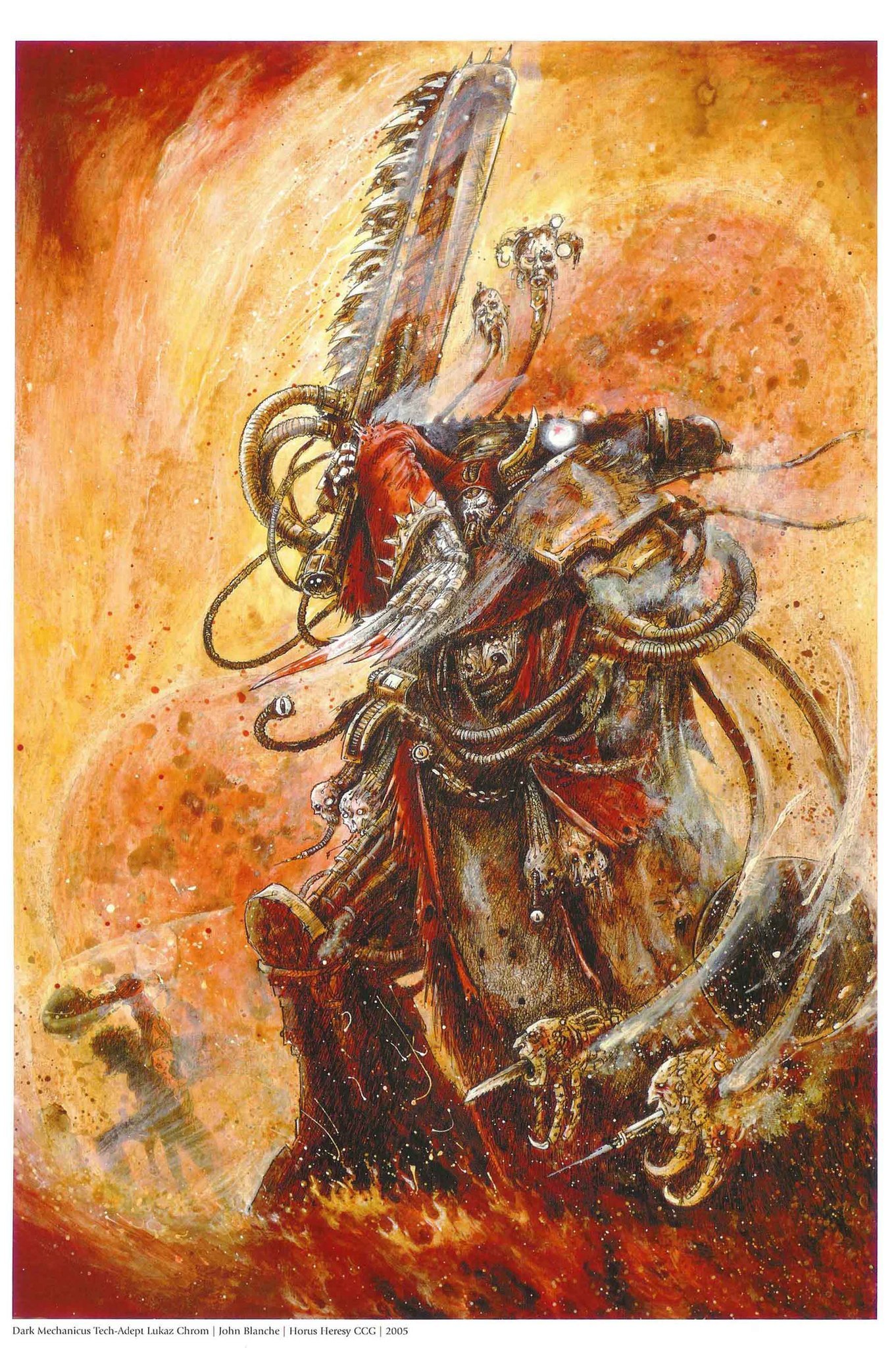 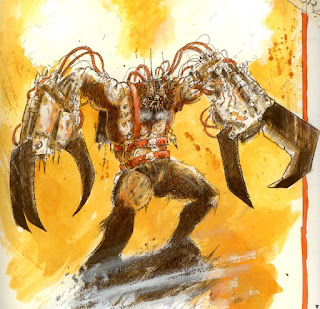 Fuck I loved this game an unreasonable amount.