The Masquerade Grid, for VtM

A little subsystem for tracking the state of the masquerade in your vampire games.

I wanted a minigame that tracked masquerade breaches and had the potential to have worse problems pop up unexpectedly, and which took into account where and how the PCs have influence. I wanted there to be basically a set of patterns for players to investigate, analyse and deal with. So here's what I came up with.

This system assumes the PCs are the main active vampires in the domain. Perhaps they're a coterie in a small town, so there aren't really other vampires. Or perhaps you're running a larp or play-by-post game with a bigger playerbase.

In our home domain, we can divide society up into a 4x4 grid, each square representing a section of society. As a rule of thumb, the higher-status a section is, the higher up it is, and the more concentrated power it has, the further to the left it is. I ended up drawing this grid for a pretty typical town, but if your setting is odd you could put different groups in various squares. Heck, a particularly big or small town could be a 5x5 or 3x3 grid.

But here's an baseline example I put together. It doesn't need to be too carefully thought out. 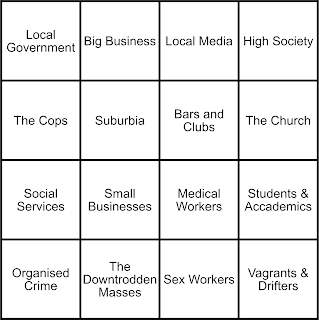 So. Each grid represents the general state of that part of society, They default to 'Calm'. Here, everything is okay, the masquerade is completely intact, all is well. Leave that box empty.
If there's a masquerade breach of some sort, pick the section of society it affects the most. That box goes to 'Breached'. Mark a big cross across it, and note down what the breach was.
If a breach would happen in a square that's already filled, it spills into a neighbouring one that would equally apply. So, a breach in Suburbia might - if Suburbia is already breached, spill into The Cops.
So, our grid above with a couple of masquerade breaches might look like this: 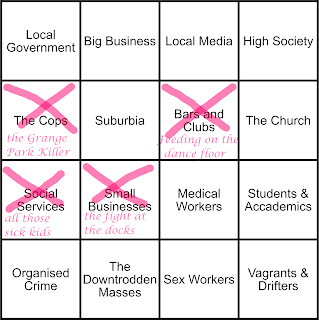 You can clear a box by dealing with the masquerade breach in it. Pin the blame on something mundane (or bogus: blaming organised crime works just as well as blaming aliens), or cover up the evidence, or silence the witnesses, or just make something much more exciting happen to distract attention.
However.
If things get bad and the masquerade breaches are wide-spread enough, you might have the kine put things together and form hunter cells. This happens if you can draw a line linking several squares together. This might be a horizontal, a vertical, a corner-to-corner diagonal, or an-off-centre diagonal of three.
When this happens, members of these disparate groups come together, realise what's going on, and form a hunter cell. Draw a line linking them together, and name the cell.
So, if thigs go tits up in our example before, and a hunter cell emerges, it might look like this: 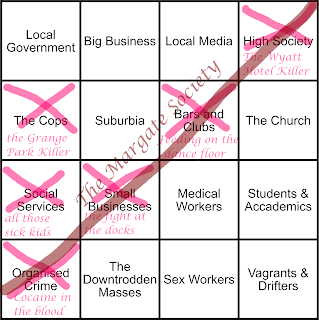 To deal with that hunter organisation, you need to subvert, kill or otherwise get rid of those involved. Blood bond them, arrest them on terrorism charges, get them sectioned, stab them in the gut, whatever. Once they're all dealt with, pick the square that best represents where you attacked them, and clear it, returning it to Calm. The rest of the squares will go back to being Breached, and you'll need to deal with the breaches in them individually before they spawn another hunter cell.

So far so simple, yes?

But here's the thing: only the ST can see the grid. Players can tell discover what's up by actively investigating it. This might mean doing the legwork themselves, probably taking a scene or two of activity. Once their investigation succeeds, they can see the state of the square. Contacts, Influence, Allies, etc all apply.

Otherwise, they can leverage backgrounds/merits/advantages to do it for them: for each dot in that trait, they can pick one square that the background can monitor. They can tell the state of the square automatically, just by contacting their NPC assets and asking them.

With the right traits, such as Influence, perhaps, they can make some phone calls to clear up a breach without needing to intervene in person.

So, here's how it works in two examples, one where the PCs are on top of things, and one where they aren't.
Competent PCs first:

Josephine has Influence in the Media. Every now and then, she checks in with her friends working at the local news station to see what interesting stories they're working on. Recently, two vampires fighting in the street were caught on camera, and the news is about to run that story: the 'Local Media' section has been crossed off. However, because Josephine has media influence, she can pull some strings to hush that story up, clearing that square before it becomes a problem.

And then, the disaster situation:

A coterie has been concentrating on internal camarilla politics and ignoring what's going on with the kine entirely: they have no idea about the state of the grid. A series of masquerade breaches happen, linking Big Business, Suburbia, Small Businesses and The Downtrodden masses into a hunter cell. The first the PCs know about it is when hunters at the local bank start shutting down their bank accounts: investigating Big Business reveals a hunter cell active, and now they need to work out who else might be connected to it, and shut it down!

What this means is that players are incentivised to monitor particular areas of society, and respond proactively to other incidents and rumours to prevent things spiralling out of control. If they don't, then problems will grow without them being aware, until trouble comes to them.

PS: Black Death Walking is finished and released! You can get it here!