This one's scary to post. I expect there'll be backlash. Fuckit.

There's been a lot of talk about the place of D&D in the wider TTRPG industry and artistic medium lately. That its utterly dominant position stifles the creativity to be found within RPGs and drowns out smaller works.

All of this is, for what it's worth, stuff I believe.

However, the fact of the matter is that D&D content sells. Some stuff clearly doesn't need to be shoehorned into D&D 5e (we don't need a D&D interpretation of The Wind In The Willows or The Great God Pan) but if you've got a classic fantasy adventure you want to make, the sort of thing with skelingtons and magic swords, then D&D 5e is by far the best market to shoot for unless your game is doing something really specific.

So, with that preamble, here are some things that are all true:

With all that in mind, why I'm doing this should make sense.
This isn't a permanent thing. I've got other little arty projects I'm also working on at the same time (in particular In Love And War and Black Lung), but for this project, I'm shooting myself in the foot financially if I don't use 5e.
I need to put food on the table. I'm fucking poor, and between my being trans and some health issues I'm unlikely to get a 'real' job. So this is just the best move for me.
No doubt there's a bunch of indie kids who are going to act like this is some grand betrayal of my indie principals, that I'm feeding the machine that crushes art, that I'm betraying indie games. And fuck that. If you act like resisting hasbro is more important than getting the money I need to live, you need to take a long hard look at yourself.
And as for why I'm not doing it as an OSR module? Because fuck that. I have self respect. I want nothing to do with that shit anymore. I was, for a while, able to endure its problems, but it got too much and I'm done. Don't lump me in with them. That scene hurt me. That scene's relentless toxicity burned me out on game design in ways I'm still working to deal with.
But that's enough heavy stuff. What am I making?

Embers & Dust is a module about depression, burnout and dementia. It's about struggling to keep that spark of individuality alive in a world that tries to smother it. It's about staring into the face of a bleak, soul sucking world, and daring to keep moving forward.
On a more practical level, it's another depthcrawl, similar to The Gardens of Ynn, The Stygian Library and Dead Girls In Sarkash Forest. Depthcrawls still fascinate me in the ways you can structure them to do different things. This one's drawing on my experience writing the other ones to do it's own thing, and reinforce it's own themes.
More specifically, it's an adventure into a pocket of the shadowfell, in doomed pursuit of... something. You go deeper into the shadowfell, and the place changes you, creeping into your bones and wearing you down until you're just another part of its endless, bleak wasteland. The question at the heart of the adventure is not if  you'll reach your destination. It's how much of yourself you lose getting there, and if it's worth it in the end.
Ynn was whimsical, the Library was creepy, and Dead Girls was painful. This one's going to be melencholy.
D&D 5e is a different system to what I'm used to working with. A bit crunchier, perhaps. More expectations of balance, more fighty. I don't want to warp D&D into something unrecognisable, but I want this to feel like me. So encounters aren't necessarily fights, and attrition is slow and grinding.
I'm still getting the hang of 5e's balance and flow. Looking at how to construct a stat block, what you can expect of a party at a given level, that sort of thing. It's a learning experience. It's actually pretty interesting, and kinda a new area of design for me to explore.
I want to play with Inspiration as a mechanic. It's underutilised in 5e, I think. Just a simple Advantage to a dice roll here and there, at the DM's whim. So I'm giving it some weight. It's going to work a bit like WP in WoD games. Sure, you can spend it to boost a dice roll, but you might also be spending it to resist compulsions and urges, to stave off depression. And you might start getting Inspiration from unexpected sources.
I think, with the adventure's thematic focus on losing yourself and hope, Inspiration is an interesting mechanic to play around with.
Other than that, I'm slowly coming up with a few cultures and ecosystems of shadow-dwellers, some big set-piece locations and NPCs that can warp your characters in interesting ways.

It's going to be good, trust me.

And finally, have a mockup of a page. Still pretty rough, but I like where it's going.
(art credit goes to Tithi Luadthong on shutterstock) 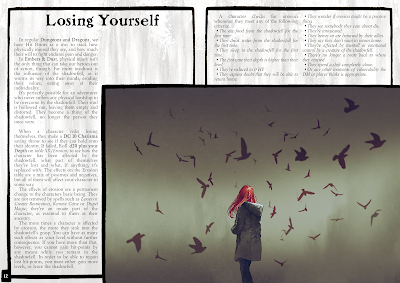