Vogenheim and Elsebeth's Rest - an example setting for Dungeon Bitches

So one thing in the GM's section at the back of the Dungeon Bitches manuscript is a set of guides for rolling up a random town and nearby dungeon. It's pretty similar to the method EE uses, as shown in this blogpost, if tweaked somewhat.
Anyway, I'm gonna go through it and roll up a sample setting for a game.

Let's begin with the local town. The first step is to work out what the main players in the town are. For this, we're gonna put together a faction map; drop a few six-sided dice onto a sheet of paper to see what there is. Where each dice lands is a faction in the town. Doing so, I get this:
To read the dice, we look at two things here; the number on the side pointing up, and the number on the side pointing towards us.The first number on the map is the top side (marked in pink on the handy diagram below), the second is the front side (marked in green).
Anyway. This lets each dice get 6 x 4 results, since for each 'top face' result, there's only 4 numbers that can be on the front; if you've got a 6 on top, that precludes getting a 6 or 1 on the front.
But, we can look these numbers up on a lil table to get a faction.
At this stage, we'll also include three constants that appear in every town: an Inn for travellers to stay in, a religious authority, and a ruling noble. For each, we can just drop a lil marker onto the map (I used three coins) and record where it lands. We can connect nearby factions with a little line, indicating an alliance.
Looking stuff up, and adding the inn, church, and noble, we get this for our map: 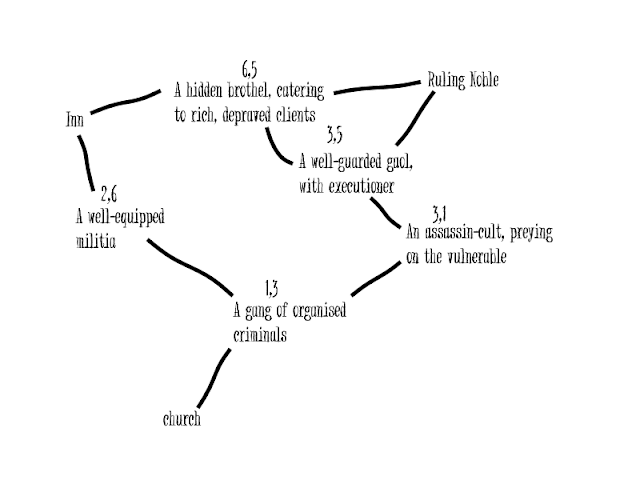 Now, already there's some interesting connections we can pull from this. For example, the church's only alliance is with a criminal gang; explaining that could probably produce something compelling. Likewise the relationship between the gaol and the assassin-cult.
But before we get ahead of ourselves, lets get a few extra details for the town. We can roll a few times on a random table for town quirks. For each, its a d66 roll, one dice as a tens, and the other as a units, for a result from 11 to 66. This is what we end up with:

Already this suggests a few things: firstly, we can make the pilgrimage site be informal rather than sanctioned, under the control of local mafia types, explaining the church/crime alliance. Maybe its an unrecognised saint, a patron of thieves and gamblers. The vulnerable people our assassin cult picks off might well be pilgrims, then; they're strangers in town, so nobody will miss them. The lynchings, combined with the way the assassin cult works with the local gaol/executioner, suggests that these killings aren't sneaky; the cult works by whipping up mobs against outsiders they deem a corrupting influence.
...well, shit, this seems painfully relevant at the moment.
Anyway, we can use this to pin down the relationships between the factions. Normally, the connection between the criminals and the assassins would be an alliance, but here I think it makes more sense to make this a secret war between the two.
The end result looks like this: 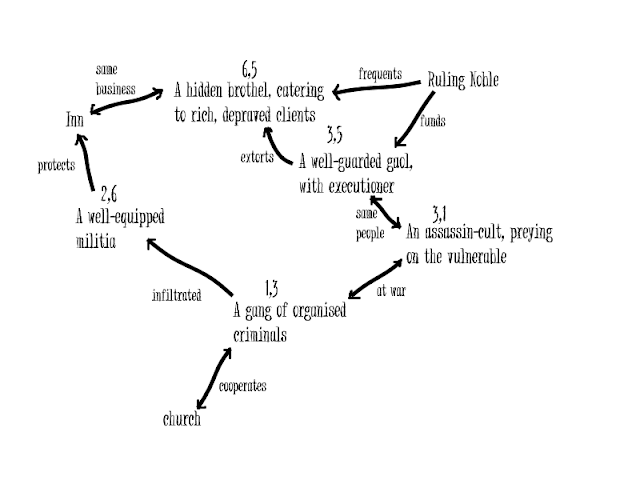 So what is this place actually like?
Let's call it Veltenheim. It's a little town nestling between the mountains and the coast.
With a militia and a gaol, it's presumably got a superficially tight rule of law-and-order, and the inhabitants seem like a painfully judgemental and vindictive lot, what with all the lynchings.
There's an underground veneration of Saint Elsebeth - patron of thieves, gamblers, and those who have limbs severed - and various rogues make a pilgrimage here. The town's respectable front, of course, thoroughly disaproves of these ne'er do wells, and frequently mobs of citizens - stoked on by a shadowy cabal of murderers - do horrible things to those who transgress the town's strict social rules.
The town's ruler - Baron Von Velten - has little interest in these internal matters; he simply channels his wealth into ensuring law-and-order is brutaly enforced, while hypocritically indulging his own vices in one of the town's more prominant hidden brothels.
So we have the idea of public judgement, hypocracy, and a hidden underclass emerge from all this. The themes and feel of the town seem pretty clear.

Next up, let's roll a nearby dungeon, for our Dungeon Bitches to take refuge in.

The first step is to come up with a network of dungeon factions, much like in the town. I'll spare the full process, and just give the end result: 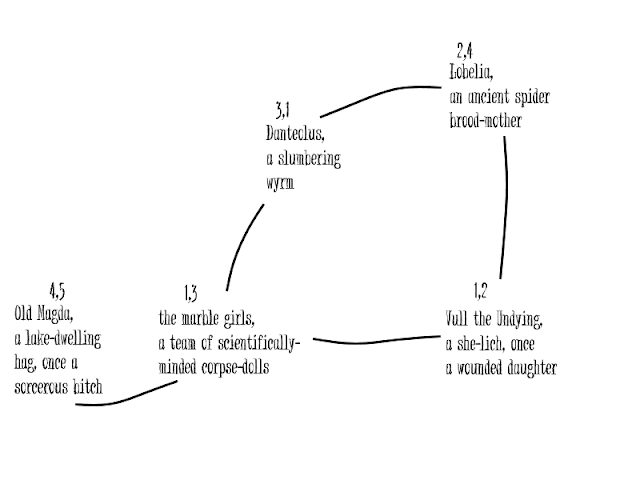 And then for the dungeon's layout, we can do a similar thing. Now, the dungeon isn't mapped room-by-room. What's important is individual encounters and set-pieces, and how the PCs respond to them, rather than room-by-room exploration. However, to get a rough feel for the place, we can divide the dungeon into a few themed sections. The method of generation is again the same; drop some dice, look at the front and top number, connect into a network. Each link on the network indicates one area is accessible from another.
Dropping some dice to get a rough layout of the dungeon, this is what we get: 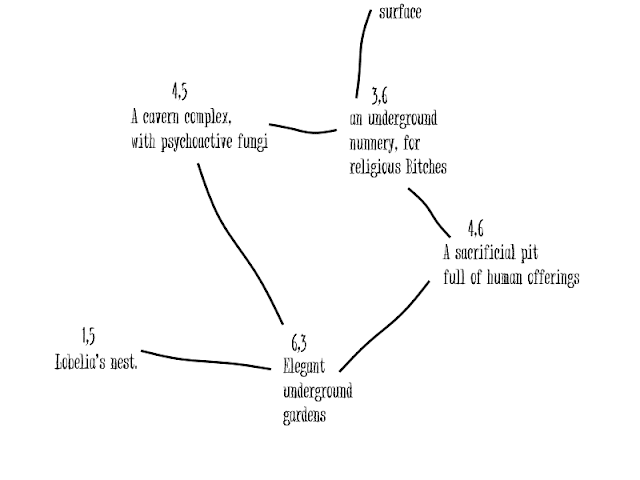 To tie the dungeon together, there are four random tables: who built it, why it was built, what the overall aesthetic is like, and why its weird down there. Like with town quirks, its a d66 roll for each. Rolling, we get:


14: It was built by a forgotten saint.
33: It was built as a necropolis.
43: The architectura style is fluid, elegant, organic. Art nouveau.
26: Your dreams here are cruel, showing what your life could have been.

So we can tie this all together too. We can make the saint in question Saint Elsebeth, who built the place to house the bodies of persecuted martyrs during a religious civil war; these are the bodies in the pit. The nunnery makes sense too, if they're venerating Saint Elsebeth. These sisters are probably not traditionally nunny - their patron is a patron of rogues and ne'er do wells, after all - but sincere in their devotion none the less. I imagine this space forms a neat little safe-community for PC bitches to rest in.We can have the gardens be underground memorial gardens, with the fungal infection being cases where the natural underground ecosystem encroached into this garden.
Our other significant powers make sense in this context: Vull the Undying can be the abbes for our nunnery; since she's immortal, she knew Elsebeth in life, even if her state as a Wounded Daughter has warped her memory somewhat. The Marble Girls and Old Magda are probably more recent arrivals, setting up shop in the more secluded corners of the gardens; the Marble Girls have a pavilion they've filled with medical equipment and specimens, and Old Magda has an ornamental pond they lurk in.
Lastly, our dragon, I think, resides with Lobelia. Both were again companions of Elsebeth, although they fell out with Vull some time ago, and have strongly differing visions for the dungeon. The pair can be lovers.
We can call this dungeon something evocative: Elsebeth's Rest, perhaps.


So, the dungeon foms a nice contrast to the town on the surface. Where the surface town is judgemental and spiteful, concerned with appearances and punishing deviation, the dungeon is more melencholy. It's about remembrance, hidden beauty, things that might have been in a better world.
It's the creation of a saint who wanted something better than the war-torn nightmare that was her current reality, a little hidden paradise. And, while it's crumbling apart, infested with fungus, it remains as a monument to her vision. The bones of those she interred here remain, as do those companions from her lifetime who are no longer - or were never - mortal.

It has some resonance to it, I think. I'd want to run a game in this setting.
Posted by Cavegirl at 15:20 5 comments: