This is entirely the fault of Ana Polanscak and co, making me want to make and show off cool crafts projects.

So I'm gonna be running Ynn (and then possibly the Library as a follow up) for a new group soon. It'll be my first time GMing IRL rather than online since I moved house a while back.
Playing in person has one huge benefit over online play: physical props. Having tangible things in your hands makes the game feel that much more real and adds to the atmosphere. It's not a huge thing, and you can (and I frequently do) go without it, but if you can put the time in for some arts and crafts, it can really add to the game.
I suspect this is the same reason why I like the costuming and special FX at larps, and why I wargame. There's something satisfying about tying your gaming to something you made with your own hands. I know not everybody is into it (lord knows I've played against grey plastic armies too many times), but I find it important.

So here's what I did for the new game.

First up, there's the relevant rules & books. I've got the LotFP rulebook, two copies of Ynn (to minimise page-turning), and a copy of Wonders & Wickedness.
Then there's print-outs. Each player gets a few blank character sheets, as well as a cheat-sheet summarising the game mechanics & character gen, and a full equipment list with prices. I, meanwhile, have a printout of the most useful tables from Ynn, as well as the horrible-wound tables. A little bit of graphic design on the sheets has given them nice Victorian-esque flourishy borders. It looks... Ynn-ey. 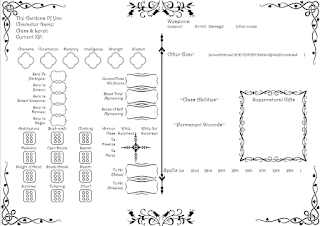 I bought a wooden box for cheap at a crafts store, made of plain unvarnished soft pine, with brass hinges and a latch. This got a going over with a craft-knife to rough it up, wear down the corners, and so on. This done, the whole thing was stained all over in sepia ink, followed by blotchy patches with watered down black and dark brown. GW's 'typhus corrosion' technical paint got put in the cracks to make it look a bit grubby, and the brass bits got thick Nihalik Oxide paint daubed on and then wiped from the raised areas, mimicking verdegris. Once this was done, I used thinned green ink & paint to stain the outside of the box, giving it the effect of old, sun-faded paint, and stencilled a neat logo on the lid in thick white paint - I used the white paint artists use for canvass, because it clumps nicely, giving a 'painty' texture. 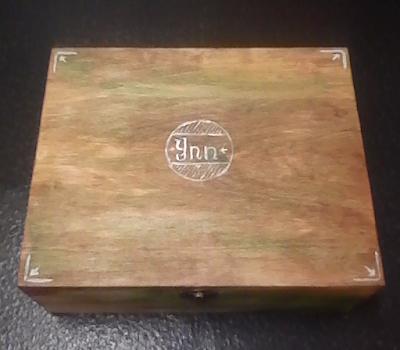 There's a little notebook that's gonna be for my notes. Brown paper, card covers. I put some slightly fancy lettering on the cover in ink, and weathered it up a bit in a similar way to the box.
In the box, we put the books, the printouts, a little leather pouch with my dice, wooden pencils, and a handfull of dried & pressed flowers to give it a little scent and some atmosphere. 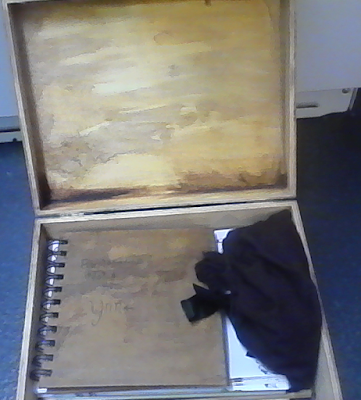 Lastly, I've put together about 100 tokens for the game, representing the different monsters in Ynn, as well as a dozen potential PCs. Each is pretty simple to make, and looks super good. You start with a standard copper coin (In the UK, I'm using 1p coins for the small tokens and 2p for the big). Blob some Stirland Mud on it in loose patches for texture (I fucking love the GW technical paints, they make everything easy). Once that's dried, wash the thing with more Nihalik Oxide, Typhus Corrosion, and black/brown/green inks. You get a really old grotty corroded look on this little brass disk. Then you can just paint on a little design for whatever monster in the same white as before, and it looks neat. 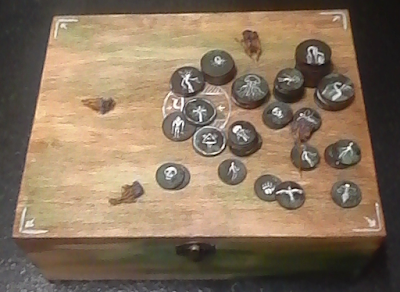 The project used mostly materials I already owned, but the new bits (box, books, coins, etc) set me back about ten quid. Well worth it.
Also for real GW's texture/technical paints are amazing for weathering and ageing and so on. It's like magic how they come together. I didn't even get to play with the flaky rust effects yet! 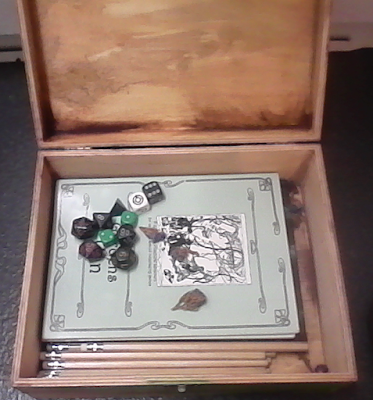