Alright Fuckers I Made a Better Version of Vamp

So, vampire the masquerade. I've played it a lot. I really like the setting and have had a lot of fun exploring characters within it (although some elements are... problematic. Yeesh, the ravnos).

But the mechanics frustrate me. They're too complex and too much of a straightjacket. I feel like I'm fighting the system to get the experience I want, and it runs best when the mechanics are ignored. 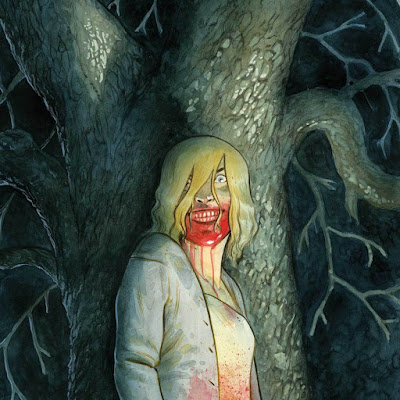 For any action where the outcome is in doubt, roll a pool of d10s. In almost all circumstances, you'll be rolling an attribute plus a skill. Every 8+ is a success. More successes is better.
Sometimes there are complications; bad things that might happen. You can spend successes to negate these complications; successes spent removing a complication don't count towards how many successes you get. If you spend all your successes on negating complications, you still fail, but avoid causing problems, which might be a bigger priority. You're probably looking at 1-3 complications, max.
If a task is particularly hard or easy, you might gain or lose successes automatically. (Before spending sux to negate complications).
For group rolls, pick whoever has the best pool and they roll for everybody. Apply the results and complications to everybody.

Influence:
Decide what you're trying to get them to do, and what leverage you're using to get it.
Roll an appropriate attribute plus skill. Probably social ones, but not necessarily. The more sux, the more extreme shit you can get them to do.
GM or player being rolled against selects complications from the following list, or invents their own.
-They're spooked by you.
-They'll tell people about what you asked.
-They do a half-assed job.
-They'll badmouth you.
-They'll only do it if you offer them a reward.
-They do it, but don't give it much priority.
-They're intrigued, and will try to find out what's up.
If PCs have influence rolls used against them, they aren't compelled if the roll succeeds. Instead, they get a point of Willpower for each success rolled against them if they go along with it, and lose the same amount if they don't.

Violence:
First determine the stakes: what each side wants, what they're trying to achieve. Maybe torpor, diablarie, capture, escape, feeding, driving them off or just inflicting pain.
Both sides in a fight roll an appropriate attribute plus skill. Probably violence, but maybe stealth or athletics if trying to avoid an enemy. Whoever gets more successes wins. Winning means whatever the winner was trying for.
For each success the loser achieves, there is a complication. The GM or relevant players pick from the list, or invent something.
-You're injured.
-If you're injured, you're put into torpor.
-If you're in torpor, you suffer final death.
-You frenzy.
-You increase Hunger.
-You lose or break something valuable to you.
-The fight is obvious and attracts attention.
-There are bystander casualties.

Feeding:
Feeding can only happen on-screen. The exception is the characters chosen predator type, which can be rolled for off-screen without needing a scene.
Each success decreases your hunger once. The GM chooses one or more complications, from this list or made up:
-Your victim dies.
-You're observed at the scene.
-Your victim's most notable personality trait bleeds through to you temporarily.
-Your victim becomes obsessed with you.
-You leave evidence of your involvement.
-Your infected with a blood-borne illness or affected by a narcotic your victim was on.
-Your victim is spooked and becomes paranoid.

Hunger:
You can increase hunger to do one of the following things.
-Add as many dice as your points in Might to your pool.
-Recover fully from being Injured.
-Rise from being Torpid, becoming Injured instead.
-Rise from daysleep temporarily during the day.
-Rise from daysleep for the night.
-Feed it to somebody, blood bonding them.
-Feed it to an exsanguinated corpse, causing it to rise as a vampire.
It also increases when a complication tells you it does or your presented with an easy opportunity to feed without consequences, and decide not to.

Effects of Hunger:
You should expect to roleplay the effects of hunger as it increases. If you have no hunger, you're happy and full. If it's less than your Might, its an irritating presence on the edge of your mind, but easily ignored. If it's less than double your Might, it colours everything, becoming a constant temptation. At double your Might or more, hunger is overwhelming and impossible to resist for long. How this affects your actions is up to you.
When you feed, if you get more successes than you have Hunger to reduce, you get a point of Willpower for each excess success. You might ignore complications to get more successes, feeding sloppily for the fun of it.
When you go to sleep each dawn or go into torpor, you lose as much Willpower as your current hunger: the hunger gnaws at your mind.

Blood Bonds:
For each time you're fed a vampire's blood, they get a point of Blood Bond on you. Blood Bond accumulates over time.
You're expected to roleplay the effects of Blood Bond against you. If the level is less than your Might, you find them compelling and your thoughts sometimes linger on them, but it's not particularly troublesome. If it's less than double your Might, you find it hard to think ill of them, find yourself obsessing over them, and have a strong desire to serve them. If its double your Might or more, you're overwhelmed by their influence, becoming utterly enthralled. Exactly how you interpret this effect in your characters actions is up to you, but its always there unless you spend Willpower to resist it.
They add their points of Blood Bond to rolls against you.
A blood bond goes away if you avoid contact for an extended period of time (on a scale of months or years), or take part in a vaudlerie. You can be under many blood bonds at once.

Diablerie:
If another vampire is at your mercy, you can diablerise them, consuming their soul. You get each of the following benefits:
-Your Might increases by 2 if it was less than theirs, or by 1 if it was equal or more.
-You can learn a Discipline they knew and you didn't.
-You can add a point to an Attribute or Skill that they were better at than you.
-Your soul is irrevocably marked by the act.
-You take on traits from them. The higher their Might compared to yours, the more pronounced this is; roleplay this appropriately o

Disciplines:
Disciplines don't come in levels anymore. They just unlock a general thing you can do now. You always need to roll to use a discipline. The specifics are left freeform. EG, animalism lets you communicate with and influence animals; any supernatural effect that falls under that purview could work, although for really dramatic or out-there stuff, you'll need more successes. GM and player between them select at least one complication, based on what could go wrong.
-The use of your power is obvious enough to be a masquerade breach.
-You increase Hunger.
-You increase Hunger
-You increase Hunger
-Your power traumatises its subjects, leaving them emotionally unstable.
-Your power leaves you temporarily emotionally unstable.
-Your power is uncontrolled, causing collateral damage.
-Your power requires you to make a material sacrifice to succeed.
-Your body is wracked by the effort, and you become Injured.
-You frenzy.

Advantages:
Advantages represent your place in society. They unlock new capabilities that you wouldn't otherwise have. You may or may not need to roll to use them. Mostly, you'll use the rules for Influence to make use of them when you do.

STUFF ON YOUR SHEET:

Might:
A measure of how potent your blood is, a function of age, diablerie, and generation. Starts at 1, and can go up. Mortals have might 0.

Advantages:
Age: You've been around for ages, a significant social advantage in vampire society.
Anonymity: You don't exist in the official record.
Contacts: A wide number of people who know stuff, who you can hit up for info.
Cover identity: A fake person you can pretend to be.
Employees: Mundane people who work for you (house staff, employees in a business you run, etc).
Fame: You're well known among mortals.
Herd: A good number of people you can feed from.
Occult Library: A big collection of books about magical things.
Reputation: Other vampires have heard of you.
Retainer: You have a (possibly supernatural) servant who is loyal and capable.
Territory: A building, estate, or other area you control, other than your own haven.
Wealth: You have lots and lots of money.

You can then spend Freebies to increase stuff.
-Increase a Skill by 1 (1 freebie)
-Increase an Attribute by 1 (2 freebies)
Get a new Advantage (3 freebies)
-Get a new Discipline (5 freebies)
-Increase Might by 1 (7 freebies)
How many freebies you get depends on the intended power level of the game. 5 for grounded street-level games or games about newly-turned vampires. 10 for more established characters. 15 for fairly old ones, and 20 or more for movers and shakers.

This is not playtested or nothing. But I figure I'd have more fun with it than the official games. It shouldn't be too hard to bolt it onto the VtM or VtR settings, or make a homebrew one for it.