So it's been about three weeks since I started Dungeon Bitches as a project, and I have been writing furiously. The rough skeleton of the game can be seen in the previous two posts here and here but I've expanded it out a lot from there. I'm anticipating the book having maybe 100 pages of a4.

So, what's in those pages?
The game starts out with a brief introduction. The overall concept for the game, a rough picture of how you play PbtA games,  set of up-front content warnings.Then after that, into the base mechanics. Stats, rolling for moves, hurt, bonds, experience and what the basic moves actually are. Then how to make a character, and the ten classes.
Compared to the blogposts, classes have been expanded on somewhat. There's an extra section in character gen, in which you define a relationship with another PC (tying the party together) and with an NPC in the world (tying the party into the setting). Fairly freeform, again designed to prompt you into considering who your PC is and how she relates to people, much like the Three Questions. Each class has been bumped from a choice of 4 moves, to 6, meaning you can spend all of your advances purely on your own class's moves, getting all of them and not needing to branch out.
One concern I got a lot with the initial notes was that the selection of classes skewed strongly towards the supernatural, with four of the six being non-mundane, resulting in a game where all the PCs were kinda weird. So, additional classes were added to compensate for that. You know have 10 classes; 5 mundane, 5 supernatural. The new classes are:

The Spider in particular went through a few revisions. The initial version was called the Lilim, and tied into some IRL mythology around Lilith and her descendants. This got chucked out because it tied the game to a real-world setting a little too hard. There were also, like, some issues with the moves where she went over the line from 'sexy and predatory' to 'kinda rapey', so they got altered. And, like, the class can absolutely still be played that way if you want to, but it's much less overt.

The next big section is on safety tools. This is honestly the most I've ever written about them. This section's not prescriptive, I don't say 'you should use this tool and it will make your game safe' because that's not how it works. Different groups will find different tools work for them. Rather, the point of this section is to be up-front about the need for something and to discuss what I've found works well. Really, the three main points are:
And the specific tools you use will follow from that.
Normally, I'd make this section pretty short, spending a few paragraphs talking about why traumatising your players is bad and a quick 101 on how not to do that, but here I've gone into a more depth. Really, though, this project is a giant pile of potential triggers, so I kinda had to give it some weight.

Following this, there's some advice on how the game is intended to be played. It begins with some general tips on how to be a good player (be proactive! treat the world like it's real! embrace emergent narratives!) and some advice on things like how emergent narrative works, the relation between fiction & moves, etc. Then some more specific sub-sections dealing with different areas of the game; Queer Stuff, Sex & Romance, Violence, Trauma, Dungeon Exploration, Safe Places & Downtime, and Going Back To Town. Each gives a rough overview of how the game is expected to work. Rather than hard mechanics, there's a discussion of things like the expected dynamics, good 'probing questions' to ask in these scenes, when to apply (or not apply) a given move, where different types of scene fall into the general structure of the game. It's about setting expectations, rather than laying down concrete rules.

The last major section is GM stuff. You get some general pointers on being a GM, and then on handling things like logistics, wandering monsters, etc. Lastly a set of tools to roll up a random dungeon (with tables for treasure, room/body searching, etc), and to roll up a random town (with tables for who the main factions are, shitty injustices to witness about town, rumours, etc).

It's a very rough first draft. There's a bunch of other stuff I wanna put in (how to set up session 1, some essays on the assumed setting and what, like, a dungeon is, guidelines to running longer-term plotlines, that sorta thing). That, combined with some full-page art, proper indexing, etc... I'm expecting expand the book out to 100+ pages.

Tonally, I've been using a very casual, conversational voice to write it. Sentence structure is loose, there's swearing, there's slang. I think the precise, technical, textbook-style tone of voice commonly seen in RPGs is quite a masculine coded thing. I want to push away from that. Using a more informal tone pushes the intent of the game quite well, puts you in the right headspace. Similarly, I'm not shying away from putting social justice stuff in the text. If I think shitty patriarchal bullshit is relevant to whatever I'm discussing, I'll just call it 'shitty patriarchal bullshit', because honestly if you're not on board with that worldview already why the fuck are you playing this particular game?


I'm gonna be running the first round of playtesting soon. I'm excited for it.
One thing I've been finding is that the more rpg work I put out, the more personal the stuff I put into it. Esoteric Enterprises explored my experiences with poverty and life on the fringes of society, for example. The islands module - under the working title And The Sea Gave Up The Dead Who Were In It - is exploring a lot of different thoughts I have around religion, death, faith, rebirth, and the failings of those principles. Dungeon Bitches is the most I've pushed this for something I intend to publish, though. It's meant to be raw and messy and personal. I'm drawing on a lot of my experiences with being poor, disowned by my family, gay, trans, homeless, all that stuff. There's a lot of stuff in there where I'm reflecting on and channelling nasty shit I've dealt with; the Wounded Daughter, Lantern Girl, Corpse Doll and Runaway Nun are all kinda self-inserts.


In some ways, it's not been an easy text to write. I'm pulling on stuff that was painful at the time, maybe continues to be painful. In other ways, it's been incredibly easy; I stick some music on, have a beer, and the words just sort of flow out. I'm not restricting myself and holding back on anything, it's kind of a brutally honest piece of self expression.

I've been working closely with an artist for this project. Sarah Carapace is super talented, really gets what I'm going for, and has had a lot of useful suggestions for game stuff and visual stuff. Plus there's a lovely rough softness to her work that really clicks with what I want from the game. Art takes time, obviously, so it's gonna be a while before the full book is ready, but when it's done, it's gonna be fucking stunning.
Anyway, I'll leave you with some concept art from her, and some test layout work we've tried. 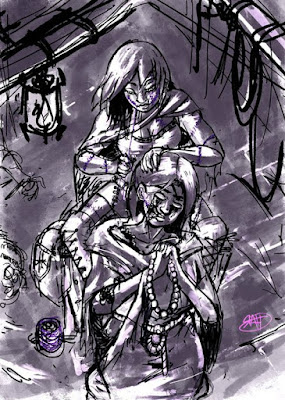 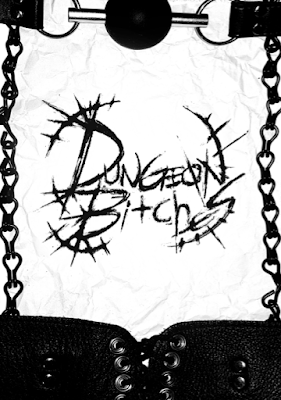 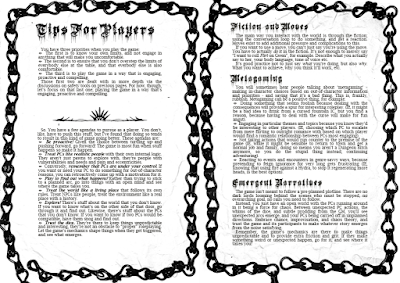 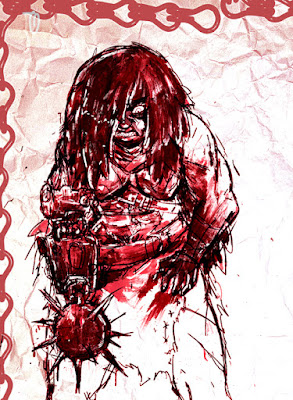