So the dreamscape based game is nearing completion. It's acquired a title - Deep Morphean Transmissions (the acronym is DMT) - and most of the text is done, and the layout's largely there, too. So Imma talk about it a bit.

I've been working with Scrap Princess on the illustrations, it's been really interesting; I've never collaborated on visual stuff before. There's been some back-and-forth about the illustrations and the look of the thing. She had the idea of using analogue photocopy textures, which have become quite a prominent thing. Like a sketch would be drawn, photocopied, more drawing on the photocopy, and so on. You get layers of noise and grime building up there, it's super cool, I really like the direction she took. 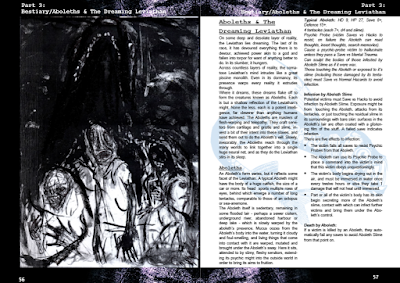 You can see that in this image, the grimy textures in the drawing. The same photocopier texture from one of these images is what was used for the page header/footer.

I've been giving scrap's art a full A5 page per illustration, with the header/footer extending to the full page around it to tie things in. It's simple but I think it looks quite striking.

The book's divided into rough sections, with the header on each page saying which section it is and what the rough topic of the page is. I've tried to limit each topic to a two-page spread, although that's not always possible. Some topics get 2 or 3 two-page spreads if the subject matter is bigger, but that's still gonna be divided into 'chunks' of a two-page spread each. Where a topic is smaller, it gets a single page, and the facing page gets one of the full illustrations on it. Likewise, if a topic covers three pages, the fourth in the little four-page section gets an illustration. 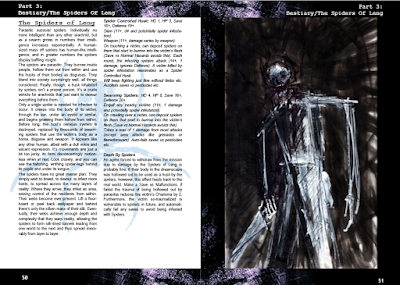 By now, you'll have seen that the text all has a watermark behind it, these are all public-domain images, often heavily processed. Each section gets a repeating watermark on each page, in washed-out blue & violet colours that tie in with scraps art. The idea here is that these images do the work of giving a page some visual interest, while fading into the background in a way that a foregrounded picture wouldn't. Plus, by repeating across multiple pages, each topic is tied together by the watermark, giving the sections more visual cohesion. Here's an example: 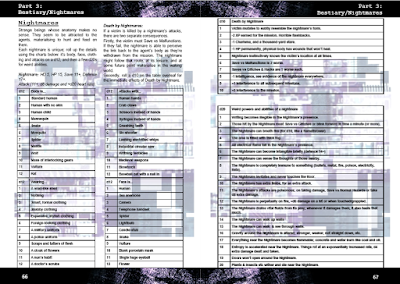 Other than that, in terms of design I've tried to keep things pretty clean and modernistic. Ariel's not a font I usually like, but it's got a sleekness to it that works well with the look I'm going for here. Likewise the tables being simple square black lines works alright here, I think. For the headings, meanwhile, I've gone with a typewriter font that I've found vaguely reminiscent of a nice 'mid 20th century' aesthetic that works for the subject matter. 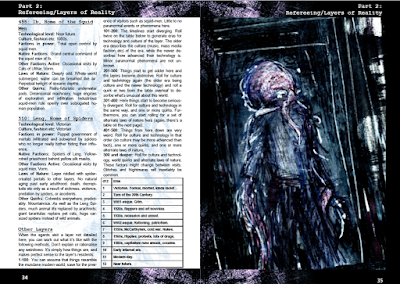 So yeah, it's coming together. I'm pretty pleased with how it's looking.
Oh, as a final thing, the core mechanics of the game all go on the PC's character sheets, including how character gen works. So while the rulebook has commentary and advice on the rules, you need to read the handouts to know the basics. There's also gonna be a set of printouts to give players with plot-hooks and hints, that work as in-character documents that the PCs are given during their mission briefing. They're gonna have the scrap-princess art (because it would be a shame to waste it, she's turned out some really good stuff), as well as carefully edited public domain stuff, and bits of text. 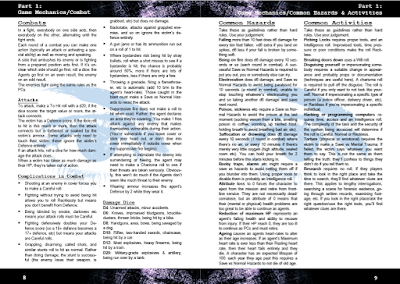 Anyway, that's where things are. I'm probably got a few days before I release this thing - it needs indexing still - but it's well on its way. And I'm pretty pleased with it.

Oh, also, there's a fundraiser for Mandy Morbid's legal fees, because that whole situation continues to be dreadful. Here it is, maybe throw her a few bucks.