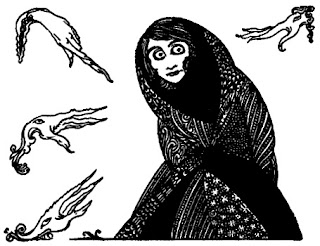 Armour class: As unarmoured
Hit dice: 1
Move: As a human (levitating)
Attacks: Poke (1 damage) or Grab (see below)
No. Appearing: d8+1Morale: 6
Treasure: 50% chance of d8 rings, each worth 100 GP, and perhaps any Evidence they bring with them.
Alignment: Lawful

The Accusatory Hand is a minor tulpa, a thought-form created when suspicions, resentments and grudges bud off from the psyche to form an independent sentience of their own in the shape of floating disembodied hands, each sprouting misplaced eyes from their skin.
Their personalities are not complete, being only fragments of a human psyche. They flock to human sinners, attempting to draw forth confessions and enact punishments much like seagulls trailing behind a fishing-boat.

While somewhat spectral, they're still semi-physical beings that take damage normally. They do not, however, need to breath and can tolerate extreme heat and cold (even up to the fires of hell and the icy wastes of purgatory).
Due to their nature as thought-forms unprotected by proper biology, they automatically fail saves vs mind-control or against abjurations and wards.


If a Grab attack hits, the Hand has latched onto its victim. Each round thereafter, they must make a Save vs Magic, and if they fail spend their action confessing to the sin they feel most guilty for (what this is, is up to the player to decide). The hand will then detach and find a new victim.
Those taking damage from a hand's Poke must Save vs Magic. If they fail, they spend their next action punishing whoever they consider the worst present. Who this is and how they should be punished is up to the player to decide. At first, this will probably be the various Accusatory Hands harassing them, but as various confessions come to light, this might well change.

The hands seem to instinctively know the the crimes of their targets, and their gestures seem designed to taunt and harangue. In extreme cases, the Hands might even bring props along with them, to better make their case. A floating hand might bare aloft the corpse of a murderer's most shocking victim, or proffer coins a thief once stole. It's not clear where they get these from.

Where they pass, lynchings and mob-violence spread in their wake.