A class for LotFP and similar games, with inspiration stolen from Adventure Time.
Written because I just finished the show, and it was good, and I love me some magical lesbian princesses. 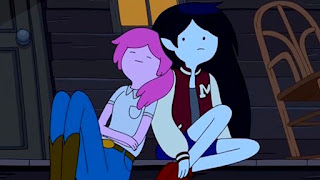 Hit Dice: d4
Saves: As a magic-user
Attacks: As non-fighters (use the MU progression if in doubt)
Equipment restrictions: As a fighter/MU.
Leveling Up: At the same rate as a Fighter.
Special Abilities:
Candy flesh: while made of sugar and flavourings rather than meat and gristle, a confectionery princess is biologically alive and must eat, breathe, sleep and so on like anybody else.
Unaging: Confectionery princesses don't age. Sugar is a preservative, you know! (+50)
Super Gay: Confectionery princesses are totally immune to charm effects cast by men, and likewise no magic or charm can compel the princess to feel affection, love or lust towards a man. She just doesn't swing that way.
Alcohol Vulnerability: Raw alcohol affects the princess like holy water affects an undead monster or elf: it dissolves her candy flesh like acid, as well as getting her kinda drunk just from touching it.
Cute yet Inspiring: Confectionery princesses treat their Charisma modifier as +1 better.
Royalty: The princess must purchase a crown, signet ring, mantle or other badge of office during character creation, at the same cost as a magician's spellbook. Her create raw confectionery, shape confectionery and create candy citizens abilities don't function unless she's wearing this badge of office. For as long as she possesses it, she's also the undisputed ruler of a small confectionery kingdom safely hidden away somewhere in the setting, largely self-governing but loyal to her commands. Finding the kingdom to resume active rulership will probably be a quest worthy of a high-level princess.
Create Raw Confectionery: As the spell Wall of Stone, cast by a magician of equivalent level, but the wall is a slab of raw candy (chocolate, peppermint, toffee or whatever the princess wants). Creates candy instead of stone. Can be cast once per day.
Shape Confectionery: As the spell Shape Stone, cast by a magician of equivalent level. Only affects candy.
Create Candy Citizens: Given a day to work, a laboratory and/or kitchen and suitable raw candy materials, the princess can create citizens for herself. This costs as much as the monthly fee to hire a follower in rare materials (create raw confectionery is not sufficient here, the materials are esoteric and hard to source). The citizenry have the stats of any normal 0th level human, do not age, and have unshakeable morale and loyalty when serving the princess (or whoever holds her crown); roll for morale/loyalty normally when dealing with anybody else.

You can change what sort of princess this is by altering what material they work with. An ice princess gets 'create raw ice' 'shape ice' and 'create ice citizens', and replaces alcohol vulnerability with heat vulnerability, for example. Ice, rust, bone, goo and glass princesses are all possibilities.

If anybody actually is crazy enough to include this in their games, please let me know how it goes.