A preview of what I'm working on for the Dreamscapes game. One of the more minor monsters. A bit spoilersy for how it all fits together.

Non-physical life forms. Where physical life is made of matter - the particle side of the wave-particle duality -  these beings are the opposide, being made of waves and fields.Such life forms are not uncommon. Most exist in a rarefied intangible way, occupying frequencies that  humans simply don’t perceive, unable to interact with matter in a meaningful fashion.
Whole ecosystems of flickering light-forms exist just beyond the bounds of human experience. Most are simple patterns of light or radiation, flickering and propagating themselves, much like plants or corals. Less are animalistic, displaying agency and action. A few reach intelligence comparable to human sentience. Of these, the most dangerous is the electric vampire.The electric vampire is a stable wave-form composed of complex self-sustaining electromagnetic fields. It flows down cables, inhabits machinery, projects itself across radio equipment. It craves the complex electrical activity of the human brain, luring victims close to dangerously faulty wiring, and absorbs the magnetically-encoded memories from within their skulls. It's intangible, ever-shifting, flickering and drifting, always hungry. Humanity's ever-more-complex machinery have turned the world into a glorious all-you-can-eat buffet for these electrical parasites.
They don’t have some grand organisation; each such vampire is an entity of its own, only loosely allied with other electric vampires. Nonetheless, their intelligence and mastery of electrical technology is such that they can become masterful manipulators of human society.
While they have no capacity to travel between universes on their own, they can possess and hijack the technological means of others. When the squid-men travel between worlds, they inadvertently carry electric vampires that wait torpid in their strange machines. Even worse, the use of an FBPI Machine opens up an electrical highway between worlds that the vampires are learning to traverse.
Electrical Vampire HD 5, HP 10, Save 14+, Defence 19+.
Electric Shocks (11+, d6 damage, and save vs normal hazards to avoid paralysis & the electrocution continuing just like other electrical shocks).  Can only be used while inhabiting something appropriate.Brain feeding (13+, d6 Intelligence lost, the vampire absorbs the victim’s memories). Can only be used on helpless targets. Immune to all physical damage. Cannot be touched. Cannot be perceived through normal sight (although the technological means to see their electromagnetic field exists).An EMP does d4 to d12 damage to the electric vampire, depending on size.When not inhabiting an electrical device, the vampire moves only slowly - drifting at the rate of a gentle breeze - and can do little other than inhabiting a machine or using its Brain-feeding ability.When it inhabits an electrical device, assign the device a number of HP based on its size and durability (from 1-3 for a phone to 50+ for an aeroplane). The physical object can take damage normally, and when it has no HP left the electric vampire is forced out of it.When inhabiting an electrical device, has total control over that object’s functioning. It can cause it to do anything that item would be capable of.
Can cause an inhabited device to malfunction, doing things it wouldn’t normally such as throw of sparks, overheat, etc. Doing so causes 1 damage to the item inhabited.

Death By Electric VampireIf a victim is killed by shocks, the vampire can imediately brain-feed on them for d6 intelligence loss before they leave the mission.
Furthermore, when a victim is killed by brain-feeding or shocks, the electric vampire can hitch a ride on the signal carrying their mind back to their body, using it to travel back to the waking world with them.A vampire inhabiting an FBPI machine while it’s in use is a terrifying thought.

And here's some art by Scrap Princess, depicting one. 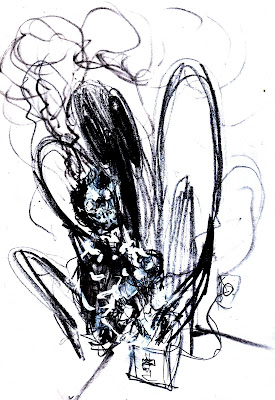