So What Is Black Death Walking? 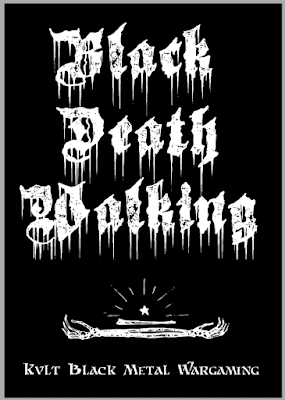 A narrative wargame I'm making, in the same vein as something like Mordheim, Necromunda or Gorkamorka.


Let's start with the setting. I'll quote right from the text, since I think this sums things up pretty well:

It has been a century since the Black Death arrived in Europe, bringing with it mass death, madness, and despair.

It has been two generations since the dead filled hell and spilled back into the mortal world, rising from their graves to prey upon the living.

It has been a generation since the Beast rose to power, opening the doors to hell.

If this is the apocalypse, how much deeper will things sink before this world is redeemed?

This is a damned world.

A world of rot and pestilence, where the living dead stalk the blighted landscape, the servants of hell preach openly, and those mortals who survive huddle in their hidden villages and besieged castles.

The great powers of the world number SIX:
The Beast, who is the mailed fist of corrupt political power.
The Whore Of Babylon, who preaches decadence and delight.
Wormwood, which fell from the sky and brings madness.
The Four Horsemen, who will scourge the earth.
The Dragon, Satan, whose rage sets the world ablaze.
Hades the abyss, where the dead walk.

So in the mix here we have grotty medieval fantasy, a plague-fuelled zombie apocalypse, and all the biblical weirdness talked about in the book of revelations. Tonally, I'm drawing inspiration from black metal, the whole turnip-28 wargaming thing, mordheim, mork borg, and the weirder bits of medieval history.
But! I'm keeping the setting pretty loose and open. I want this to be a sort of jumping-off-point for modelling and stories, not a tightly detailed setting you're expected to be accurate to. It's one of those settings that's made of themes rather than facts, y'know?

It's a skirmish game, with maybe ten models to a side, each with individual stats.

The core game itself is pretty streamlined, but not the bare-bones minimalism you sometimes see. Tests are roll-under, and advantages and disadvantages let you roll an extra dice and take the better/worse. Pretty simple.
Each turn, each model gets to do exactly one thing. It might move, use a special ability, shoot, or resolve a fight. That last one bears some thought: a model has to spend its one action that turn to resolve the fight, and then every model involved rolls off to see which side wins.
This means that timing becomes important. An action spent resolving a fight is wasted, when you could instead wait and make your opponent use their action to resolve the fight instead. But if you wait, maybe your opponent can bring more of their forces to bear, tipping the scales in their favour. So when to wait, when to push more models into a melee, and when to seize the moment becomes an important tactical decision. Timing and momentum matter.
Violence isn't super lethal. A shot has maybe a 1-in-4 chance to take a model out of action if everybody has middling stats. The same goes for a blow struck when you win a fight. So shooting lets you whittle down the enemy, and winning fights is as much about pushing back and disrupting enemy formations. Decisive blows that take a model out of action are turning points.
On top of this, most games will have zombies present. Sometimes only a couple, sometimes over a dozen. More might well join over the course of the game.
The zombies use their own AI. Each turn, after every player has gone, you draw a card (from a standard 54-card deck) for what the zombies do, and the suit and value will give you some instructions that you can resolve automatically. Some games, zombies will be a complication to play around or cause mild attrition. If you get unlucky, though, the zombies can prove to be a massive problem as they swarm vulnerable models.
All in all, this produces a game where timing and position matter, where you can lock down enemies or force their hand with careful timing, and this lets you play over objectives since a board-wipe is probably going to be fairly inefficient.
Notably, scenarios in this game use loose objectives - things like 'hurt a particular enemy' or 'defend a monument' or 'find as much treasure as possible' - but these are your suggested goals at the start of the game. What you're trying to do might shift as the game progresses. Maybe one enemy model becomes a real problem for you, and you want to take that particular fucker down. Maybe things go badly, and you just want to get out of things intact.
The game ends by mutual agreement, when both players agree that the outcome isn't in doubt. You win if you honestly feel like you can call how the game ended 'winning'. It's possible for both players to claim a win, if their goals were orthogonal to each other. It's possible for you both to lose if the zombies got lucky.
But when games end, that leads to the campaign system. At the end of the game, models that got taken out of action suffer a wound, lowering the value of a random stat. Likewise, models that survived intact on the winning side get a battle scar, improving the value of a random stat. So, depending on how the games go, your models will find their stat lines evolving to reflect what they've been through.
If a model dies, however, it's not gone. That would be too merciful. Instead, the plague in their blood brings them back as undead, which is a bit of a debuff but hardly career ending.
Then, you get a bit of income. More if you did well during the game. Probably enough to buy a new model every couple of games.

Lastly, then, you roll for Events. This is what happens to your warband before the next game. Maybe you find wandering strangers who want to join up with you. Maybe you find treasure or somewhere useful. Maybe there are grim portents of the end of days, and your warband are... altered. More than anything else, Events will make your warband evolve and mutate over time. A warband can end up going in unexpected directions, as the end times fuck with them.
On top of this, every warband has an expiration date. When you make them, you decide what their ultimate destiny is. This could be glorious, tragic or quietly poignant, but it's the end of the road for them. Maybe they go out in a blaze of glory fighting the forces of the Beast. Maybe they succumb to the plague infecting them. Maybe they establish a beachhead in the depths of hell. Whatever it is, their story is over. Certain events will bring you one step closer to this final destiny, as might the results of the games you play.
Really, the game's about telling stories over winning or losing. Success brings you closer to your inevitable end, and failure isn't too punishing, so go with where the dice take you and make it interesting.
So lastly, warbands. Who can you play as?
There's twelve warbands in total. Each has a selection of default models it can take, but you can always pay a little extra to hire in a model from a different warband as a mercenary. There's also hired swords that can only be taken as mercenaries. So while each warband is tightly themed, you can spend a little to diversify things.
The warbands available to you are:

Survivors. The regular remains of humanity, living the most normal lives they can. Regular soldiers, knights, nuns etc. They're a pretty default middle-ground warband, with average stats, access to most equipment but nothing particularly weird about them. Good for new players, and you can adapt them in most directions as the game progresses.
Flagellants. Apocalyptic weirdos driven to religious madness by the end times. Half-naked weirdos covered in scars, waving bibles around and hitting you with spiky chains. An all-melee horde list, with lots of models that can hit hard but die fast.
Hoods. Isolated rural survivalists, shunning the outside world as much as possible. Probably also bandits. On a good day, this is the shire, on a bad day this is the hills have eyes. All-shooty all the time, relying on the weight of massed firepower.
Witch Covens. Weirdo cults in the woods fucking about with the black arts. They were always there, but now they don't really need to hide, and the ancient things they worship are waking up. Their monsters are huge horrible beat-sticks, while the witches themselves hang back to support them or fuck with the terrain.

Damned Servants. The court of a demon prince, freshly arrived from hell, and its mortal followers. Probably part of hell's organised efforts to take over the world entirely. An elite ranged list that sits back and throws hellfire at you.
Decadent Cabals. "It's the end of the world as we know it, and I feel fine". A mix of mortals, succubi and other weirdness, who've concluded that if we're all damned anyway, we might as well go out partying. Physically weak, but with lots of ways to disrupt the enemy through deception, or even take out models just by making them very uncomfortable. Absolutely insufferable.
Haunted Exorcists. A bunch of angry ghosts and the unfortunate mortals they're haunting. All about movement and positioning, with the humans in the list as lynch-pins that the ghosts slingshot around. Impossible to pin down, and good at capitalising on mistakes. And very spooky.
Ressurectionists. The obligatory necromancers. Fucking about with things mankind was never meant to understand as they try to cure the plague, or harness its power. They do mad science to turn wandering zombies or any corpses lying around into husks under their control. Then they stitch those husks together into giant flesh-golem beatsticks.

Helldivers. Since demons keep showing up, that means the gates of hell are open. These are humans capitalising on that to explore the underworld, shrugging off the limits of mortality as they do it. Helldivers turn corpses into harmless waifs, and then use those waifs to bring back their dead models. They also die really easily, and sometimes kill themselves on purpose. Very weird to play.
Plague Bearers. Humans that have caught the black death, quarantined into their own warbands. Not sinister nurgle types, just people coping with the shitty hand life dealt them. That said, if you injure them, their infected fluids splash everywhere, hurting uninfected enemies nearby. And then some of them have a funeral bell they can ring to injure their own models at convenient moments. So: CLANG! SPLAT! AARGH!

Plague Rats. The meek shall inherit the earth, and by that we mean rodents. Rats that are becoming sentient and are very keen about this whole apocalypse business, as once all the humans are gone, that means they get their stuff. Some of them are on a quest to learn how to make cheese. A giant tarpit horde. All of their models are absolutely rubbish, but you get loads of them, and more will show up as the game progresses.
The Wild Hunt. Want to play as one of the horsemen of the apocalypse? Now you can. The wild hunt are a mix of angels and fairies and bloodthirsty horsemen that charge around the place reaping anybody who gets in front of them. You get one horseman, who's unreasonably powerful, and a few angelic followers, who are still very very strong. Hit hard and fast, but deal with being wildly outnumbered by everybody else.
And in conclusion, here's some page shots of the layout I've been working on. Inspired by metal zines, mordheim, and similar. All stock art, with some image processing and such to make it work. It's coming together okay. 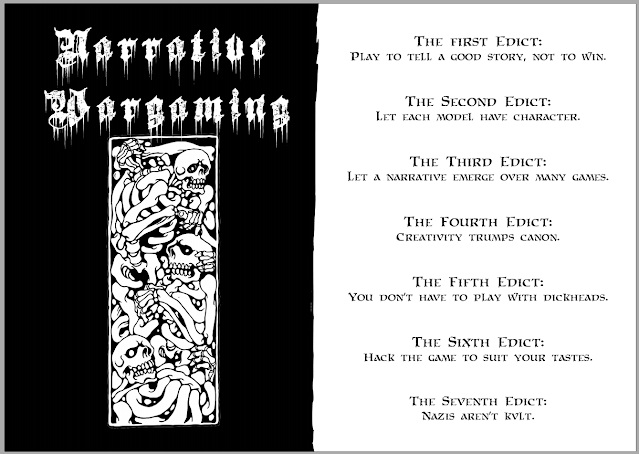 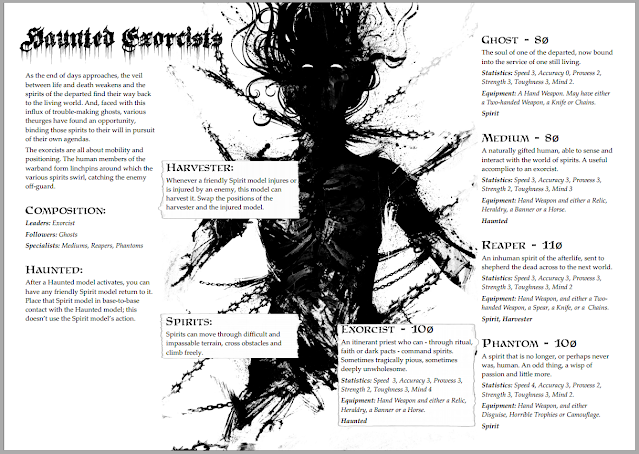 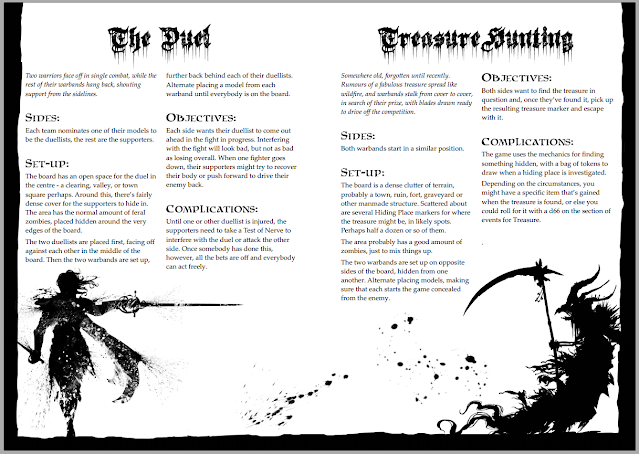 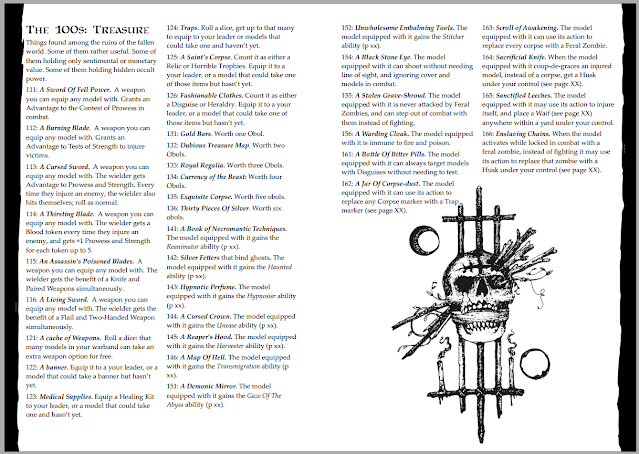 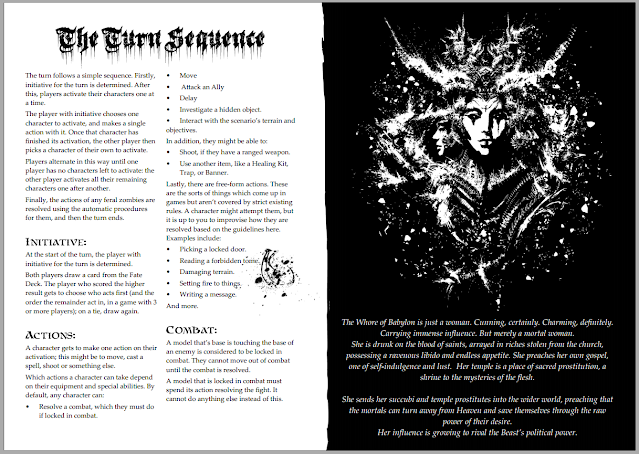 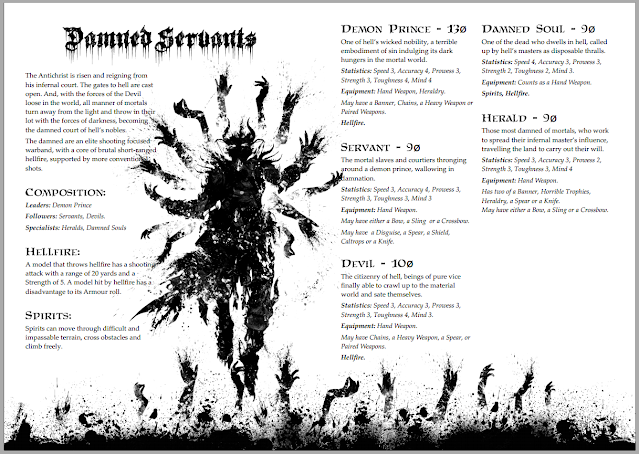 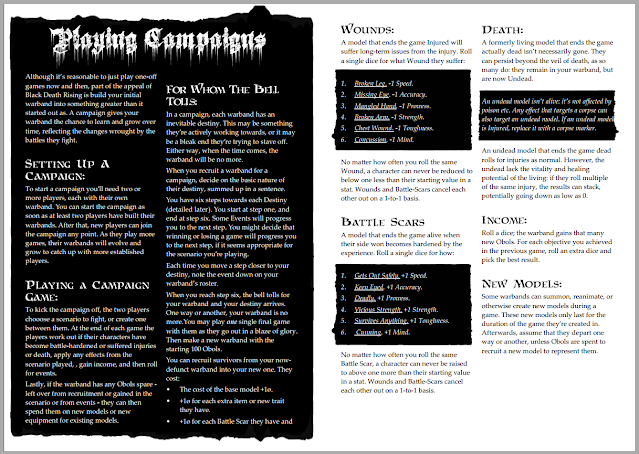 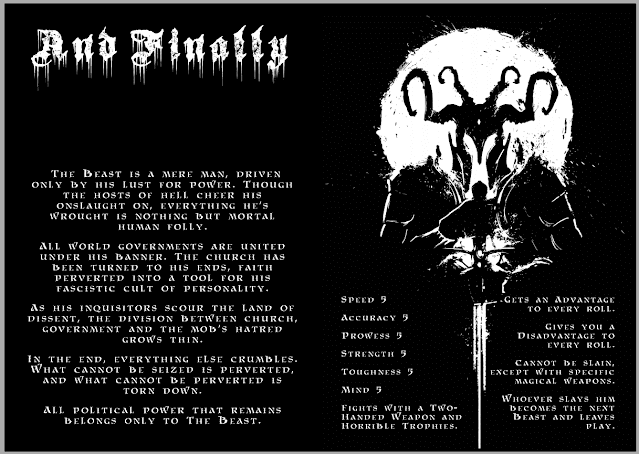