Something Rots Pt 1: The Fate of DeMontfort

So, I'm running a short Dolorous Stroke campaign at my local gaming club, for five players (each with one character and perhaps a sidekick) on one side, joining together on a Noble Quest.
Short pitch for the campaign is that there's an isolated valley, in which a huge battle was fought a few decades ago, and which now contains the mass grave of those who fell. The PCs are various nobles sent to make sure nothing bad is going down.

Since this session needed to function as an intro to the game (only one of the players had tried TDS before, and most were new to skirmish gaming) I set things up to form a neat intro to the game.

On the player's side, we had:
Sir Reynauld, a knight hospitalier with axe, shield and crossbow, and some faith powers. A generally competent all-rounder of a knight.
Sir Ector of Badenworth, an elderly knight, coming back from retirement for one last job. On horseback, with various melee weapons for different foes, a longbow, and all of the sensible adventuring gear.
Sir Ector's grandson, on foot with a bow and other gear.
Sir Aedyn, a reclusive nobleman who doesn't deign to go outdoors much. Equipped for necromancy, with the ability to feed on other people's Virtue cards when he pulls their souls out. Lightly equipped, not really a front-line combatant.
A ghost Sir Aedyn can summon to fight on his behalf, a spooky skellington spearman.
Sir Barnebus the Shield, a foot knight with defensive focus, a big hammer, not much brain, and a fairy paramour who's placed him under an enchantment. Another solid melee beatstick like Reynauld.
Bill the Peasant, Sir Barnebus's hired man-at-arms, with shitty stats and a spear.
Lady Eleanor Blackwood, a minor noblewoman with various support spells and theurgical spells.
Nefta, an angel summoned by Lady Blackwood, a big looming thing that's very fast but not that good in a fight.
That's nine models on the player side, with a mixture of marksmen, spellcasters, summoned minions, support and front-line fighters.

The board was a rough blob, divided in two by a rusted fence diagonally. On one side, we set up the PCs, among marshes and stunted trees. On the other, a denser forest with a small chapel at the back. Here I set up the main opposition the PCs would encounter: Sir DeMontfort, an absolute beast of a knight with high stats and some weird corrupt biology, and his four retainers (two with spears and shields, two with bows). These five were all pretty simple, save for DeMontfort himself who had a couple of interesting tricks - a minion he could summon (by vomiting out his own skeleton to fight next to him) and some healing - alongside his fucking nasty high stats. A single knight, some supporters with spears, and some archers would give us a good overview of the basic dynamics of a fight, without anything too weird happening.
I also set up a little mandrake in the woods; it initially looked like just a cute lil' plant, but would prove important later in the fight, hopefully teaching the players to pay attention to their surroundings. Likewise, I lined up some scary looking models - skeletons, ghosts, tree-monsters and so on - next to the board to keep my players guessing what might go wrong.

The game started with Sir DeMontfort hailing the PCs, and telling them to leave this cursed place (they were about to enter the horrible vale itself, through a gate in the fence), lest he be forced to drive them away.
As Sir Ector and DeMontfort negotiated, (both moving out of position to talk like gentlemen), some of the PCs tried to sneak towards the gate leading into the woods, not doing a particularly good job of escaping notice. Meanwhile, DeMontfort's men-at-arms took up defensive positions and took aim in case things kicked off.
After a little back-and-forth roleplayed between myself and the PCs, they got an idea of who DeMontfort was and what sort of curse he might be labouring under. It was at this point that they noticed the mass of leeches squirming under his skin and, concluding that something was badly wrong, decided to kick off a fight.
In the initial skirmish, DeMontfort belched forth his skeleton to hold the PCs at bay while he galloped back to the gate to set up a defensive position with his men. His skeleton was rapidly cut down, as was the ghost Sir Aedyn summoned to tie up the archers. After a brief flurry of exchanged shots, in which Aedyn got clipped by an arrow, losing blood but soldiering on, things devolved into a melee in the centre of the board.
As those on foot attempted to push into the woods, it devolved into a massive brawl with DeMontfort and his spearmen holding off Bill, Barnabus and Reynauld. This fight went as I'd hoped: it quickly became apparent to the PCs that they needed to control the tempo so fights would be resolved in their favour before DeMontfort could get involved and swing things with his frankly obscene 7 Prowess. Bill fought heroically (especially considering his shite stats) but had one leg sliced off by an attacker.
Finally, Sir Ector charged into the fray, catching DeMontfort from behind and smashing his head with a single sword-swipe. The leech-infested knight, gravely wounded, accepted the PCs offer of surrender.

This seems good, right? Well, no. The little mandrake from earlier had been quietly ambling towards the fight, and - seeing blood spilled - gave a horrified scream that tore at the very souls of those present. Worse still, a group of huorns shuddered free of the trees hosting them and lurched angrily towards the fray!
This prompted a frantic re-negotiation as DeMontfort's men and the PCs took up defensive stances (and DeMontfort himself began crawling back to his skeleton to reclaim it). The huorns hit these lines in a horrible orgy of violence, smashing men-at-arms to the ground and ripping them apart.
As the PCs fought a desperate defensive battle against the tree-monsters, Sir Barnabus sprinted up to the mandrake in question and promptly stomped all over it, taking it out of the fight. The huorns were driven off, and the fight itself ended. The fallen were patched up, and the PCs stuffed the dazed and unhappy mandrake into a sack for later use.

The whole fight was intended to teach a few lessons; in the first half giving the PCs an understanding of the importance of positioning and timing, which sunk in eventually after I made a point of screwing their plans over with cleverly-timed charges and fights. In the second half, the mandrake's shriek and emerging tree-monsters were intended to demonstrate the more narrative aspect of things, that your objectives would shift and the fight would often involve unforeseen complications. Dealing with the mandrake required the PCs to be clever and think in terms of the fictional world, which they got pretty quickly.

The whole thing had taken around two-and-a-half hours to resolve. We concluded with a thorough debriefing of DeMontfort, who informed the PCs that the water was tainted, and drinking it was what had infected him with the horrible parasites that drove the two sides to fight. He warned them that things would only get worse further into the valley, and drew them a little map with various points of interest on it. From this, the PCs decided that they would attempt to find the valley's main river and follow it upstream to it's source, to see what had corrupted the water.


Essentially, the map lets the PCs give a suggestion for what they want to do next: next weeks game will feature a fight on a river-bank against giant leeches and the cursed vampire-knight whose been training them.

Anyway, here's a picture one of the players took of the board. Having custom minis for everything and a lot of neat terrain seems to have really hooked my players, so I'm definitely glad I went all-in on the modelling for the game. None of it was super-exciting, but it all worked together nicely. 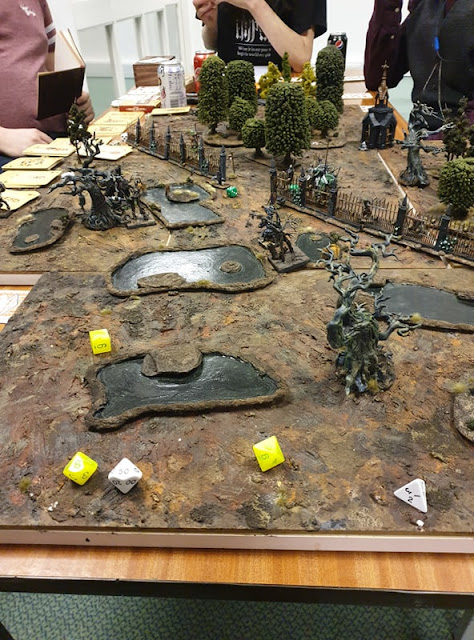