I made this cool thing.

So, book 1 for Esoteric Enterprises is done and up for sale. In this post, I'll talk about it a bit, and post some screenshots from the PDF.
First up, here's the (still WIP since I'm fiddling with the print stuff) front cover. 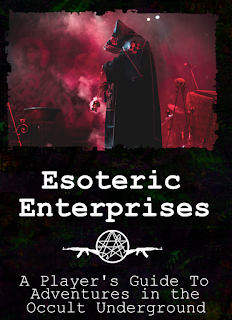 So, the game is basically built around the same engine as WP&WS. Built around a skeleton of LotFP and B/X, with the various houserules I apply in basically all my games. So, Flesh & Grit for hitpoints, ability modifiers apply to your skill rolls, everybody gets access to fighting agressively/defensively, experimental spellcasting, mystics (who roll for prayers rather than memorizing spells) instead of clerics, etc etc. If you're familiar wth WP&WS, this will be very familiar to you, if you're familiar with LotFP and other OSR games, still pretty familiar. 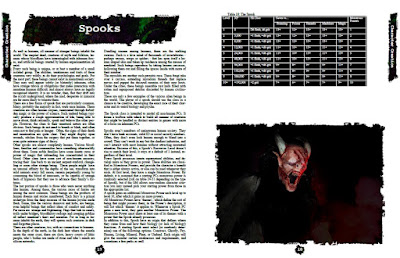 Classes (and their more familiar equivalents) are: 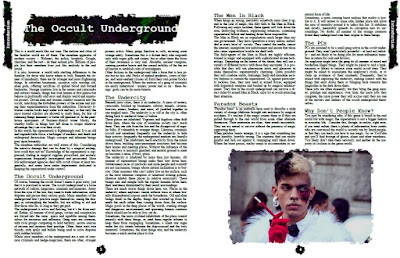 But, it's updated for a modern day setting. So, the saves go from paralysis/poison/breath/wands/magic to stunning/poison/hazards/machines/magic. Stunning is used for a lot of stuff like electric shocks, and machines is a save vs traps, technology and so on.
There's rules for guns. Guns are actually pretty simple in this: long range, roll to hit as normal, high damage dice (d12 for a shotgun!). A roll of 1 to hit means you're out of ammo and need to reload. It's really all you need, to be honest.
The most interesting tactical stuff in a gunfight comes from the suppressing fire option in combat. Rather than making a roll to hit on your action, you declare which area you're shooting at and get to make a roll to hit on the enemy's action if they make themselves vulnerable; if multiple enemies make themselves vulnerable, you can make multiple shots. (Anybody can do this with an automatic weapon, but the combat specialists - mercenaries and bodyguards - get to do it with basically any gun). Combine this with cover giving massive bonuses to AC, and you get fights where both sides are hunkered in cover and need to find ways to flush the other side out. Grenades, magic, flanking maneuvers etc etc come into play here. It's streamlined but produces cool tactical situations.

Oh, I made the horrible wounds from the back of WP&WS core in this. Because I like them, and 'you die at 0HP' is fucking trivial to houserule in so if you don't like it the fix is easy. Hell, the game outright states that the wounds are just for PCs and monsters die on 0hp, so its right there even if you're dumb.

Other stuff you have covered are things like hacking computers, disguising yourself, going to the hospital, finding a guy to fence your loot, etc.

Loot is where you get your XP from. You get XP by:


And nothing else. So a PC who has leveled up has, by necessity, made a fuckton of money doing so. As a result of this, I've scrapped tracking money for every purchase and assume that, the higher your level, the richer you are and the better your life is. The resources available to you are based of your character level, and set what you can afford to buy: for anything expensive, you roll under your resources level to see if you can scrape together the cash to afford it. More important is finding somebody willing to sell you whatever it is you want on the black market: this is where the Contacts skill comes in. 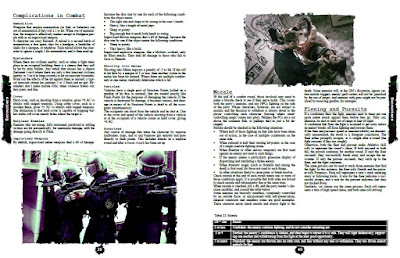 Magic is in the rough vein of the LotFP and WP&WS model: weird cosmic shit that mortals are meddling in. Classic spells like fireball and invisibility are in, but stranger stuff is also in, like a spell that makes all technology nearby fail, or one that transports the victim into the future, making them a problem for tomorrow.
There's a bunch of tables for magic; things that happen when you fuck up, mostly. I fucking love magical fuckup tables, they can push events forward, inflict things on PCs that make them feel unique and produce those OH SHIT HAHA WOW moments that I like. Different fuckups have different tables, so translating a scroll wrong has a different table to failing to please your god.
Occultists can (with some work) make scrolls to cast from, and Mystics can pass their spells on to the faithful as blessings, so both classes get to share the love somewhat. 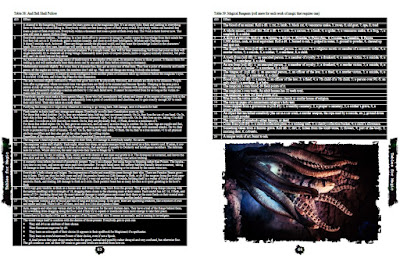 There isn't much of a concrete setting in the book: a few pages in the front explaining what the Occult Underground is, who the Men in Black are, what Paradox Beasts are. The rest is all implied. You get mentions of various supernatural factions like the Lithic Courts (from the deep underground) and the authors of various grimoires. And then, with the tables in the back about coming up with character backgrounds, you can probably deduce a lot of the feel of the world just from that. 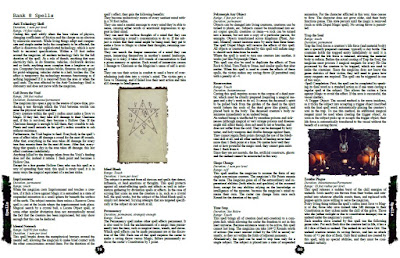 Really, this game is just me mashing my two big loves in gaming - oldschool D&D and World of Darkness - into one package. So its a game where broods of vampires wage a hidden war with mexican drug cartels, where boneless goblin-things squirm through the sewers hunting vagrants and drunks, and where cultists of Ithaqua meet in abandonned buildings to offer sacrifices to appease their horrible god.
I've written before about how, to me at least, D&D PCs should be scummy semi-criminal social outcasts. How Adventurers are the desperate types on the fringes of society. This game is pretty explicit about that. If you're a PC, it's because you're a weapon smuggler or a cultist of something the authorities have proscribed or a flesh-eating undead monster or just kind of a drugged up social dropout. 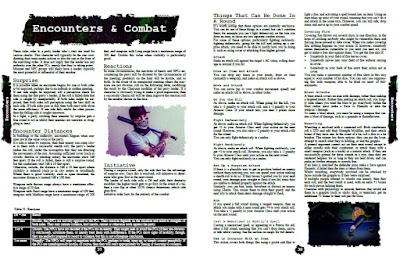 I'm pleased with it. It's by no means perfect (I am both terrible at spelling and can't be assed to hire a proofreader, and my budget for art was literally £0.00) but it's come out fine.
I'm hoping that the atmosphere comes across nicely. It's a game about scummy weirdos fighting nasty monsters in the sewers, so they can hijack a shipment of cocaine and occult grimoires. It's a blend of gangsta rap and black metal and weed and the occult and mafia films and lovecraft. The Black Goat In The Woods With A Thousand Young mashed up against inner-city gangs peddling coke.
All the shit your mum was worried that this D&D stuff would get you into. All that scary music your parents disapprove of. Like, I don't wanna be too edgy with it, but a game where you get gunned down by the police for sacrificing kids to an Aboleth is a good game IMHO.
This is book 1, with the game rules and stuff in it. All you need in order to play. Book 2 is still WiP, but will be for the ref. This one has monster/NPC stats, systems for handling the too-and-fro of the underworld politics, guides to building locations, all that jazz. It will probably have a bunch more stuff on the implied setting: nothing concrete, but a lot of ideas to spark the imagination.
I'll put it up when its done. In the mean time, stuff that I think is cool or useful enough will go on this blog.