So. 2020 has been a heck of a year.
In march, right as the 'rona hit, I started work on Dungeon Bitches as a project. It's a bit of a departure for me - a storygame about feelings with an overt message - but it's been a really rewarding game to work on. In a lot of ways, its more personal than other stuff I've written, more heartfelt. It deliberately reflects my experiences as a queer woman in ways that are at times rough and raw and unpleasant. So, this is a piece of design that matters to me.
I'm gonna talk about it some, and sprinkle in screenshots of how the thing looks in my layout program atm. 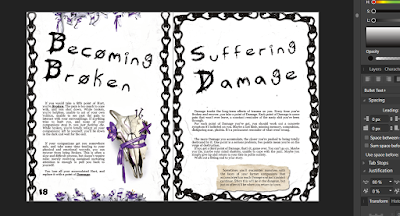 Over the course of the year, the game's been extensively playtested, taken apart, hacked, re-written and iterated on to get to a point where I'm happy with it. It's close to that point now. I've got a decent version of the book that I'm tweaking, but the writing is mostly done.

So, what's actually in the book?
You get the introductory stuff at the front - credits, what the game is about, a snippet of fiction to set the tone - and then from there the game's mechanics are explained. Starting with the basics of how storygames work, and then going into mechanics like how to roll for a move, hurt, getting broken, bonds, experience and so on. Those basic game mechanics take up 9 pages; the actual rules of the game are pretty light.
Then we get the games default moves. Each stat (queer/subtle/hard/soft) gets a two page spread.

There's a few pages on how to set up a game and make PCs, and then we get into the Deals (a 'deal' being the game's term for class/archetype/skin etc). Each Deal gets 4 pages; a two page spread with a luxurious full-page illustration and the fiction for the deal, and then another two page spread with the mechanical stuff. After this, some guides for homebrewing your own Deals and Moves, and some rules for 'Legendary Bitches' - basically high-tier options for PCs who've run out of stuff to spend advances on. 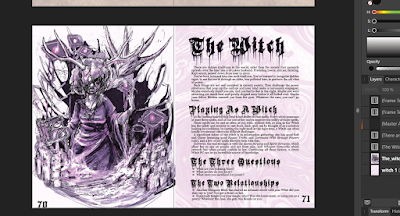 After this we get into safety tools, taking up thirteen pages. This shit is important in any game, but doubly so in something like dungeon bitches that delves into darker, more personal stuff. There's a lot of useful tools out there - enough to fill a good sized book on their own with no game attached - but I've focussed on two particular topics here. Firstly, why safety matters and how the key to getting it is trust and communication. And then a sampling of tools that I've used personally and found worked well. Really, this section is a jumping-off point, an introduction to the topic, because the best tools for you will vary from group to group. The point is to encourage a culture of consent and care. 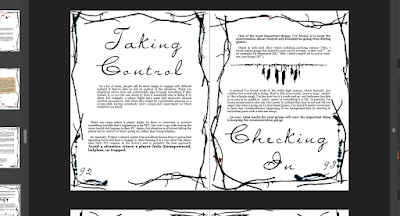 There's then a decent sized section explaining how the game is meant to be played. It's not really mechanics, but more about communicating the intended playstyle. There's sections on queerness, romance, trauma, violence, safe places and so on. This is kinda the meat of the book. You could read this section, ignore the mechanics and just freeform it, and if you follow the advice in here you'll get the intended experience.

Then last up, you get some thoughts on using the Wounded Mother and Hollow Men, before the book closes out with GM tools. Some explanation of GM responses and how to use them. Then, because it's me, a big ol' pile of random tables. Encounters, events, monsters, NPCs, problems. And similar tables to put a setting together, building a dungeon and a town based on random dice prompts.

So. It's a decent sized book. About 150 pages, give or take, a4, full colour, illustrated. I've been experimenting with some graphic design stuff, and Sarah's artwork is frankly stunning, so I'm confident its gonna be pretty once it's done. 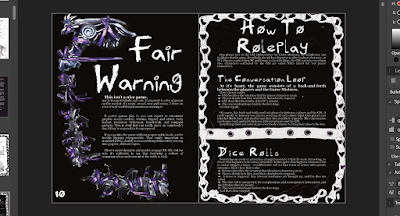 Anyway. How does this play out in practice?

The single key element here is Bonds. You can spend 'em to give each other plusses to rolls or to offer each other XP. Bonds represent the strength of your relationships with other PCs, and you absolutely rely on them to succeed. In practice, I've found the flow of bonds between PCs is hugely important, and can tell you a lot about how they relate to one another.
This is something I really wanted to get across in the game. Your biggest strength is your fellow bitches, how you support each other. The bonds between you really, tangibly keep you sane and alive. A bitch on her own can easily be screwed, but a group of them together can - if the bonds between them are strong enough - basically overcome anything.

I've tweaked Hurt some since the initial write-up. Now, when you get too much Hurt and are Broken, it's temporary. You're overwhelmed and helpless, but if your fellow bitches can get you to safety you can recover. However, being Broken like this leaves permanent scars, reminders of the extreme trauma you've been through. Pick up too many, and it'll subsume you, and you'll be gone for good.
So, characters are less fragile. You're less likely to lose your character, more likely to have her become vulnerable and fucked up.
A key thing here, I think, is that you the player get to pick the exact form your character's scars take, and how they manifest. Trauma affects people differently, and the game lets you explore and portray this however fits your character best.

A few moves - flirt, share pain, spending bonds, healing - serve to build up a web of connections between PCs. Relationships between bitches tend to end up tangled and messy. There's often a strong level of romantic tension ('flirt' is probably the most commonly rolled move, after all), sometimes this remains bubbling under the surface and sometimes it emerges and gets acknowledged. You get these overlapping relationships and petty conflicts and love triangles and it just works. I've seen some absolutely wonderful love stories told in the playtests, sometimes painful, sometimes heartbreaking, sometimes ugly, sometimes heartwarming.
And, like, sometimes that means sex. The relationships between PCs can get intense - intentionally so - and so that moment when two characters finally fuck is just... its got some real potential there. I could have shied away from some of the more overtly sexual elements, but I think including them enables some really powerful moments.

Something that emerged over time, that I'm really pleased with, is the relationship between the town and the dungeon. In most games, the town is safe - a place you retreat to in order to rest and recover and resupply. Here, that's not the case; the town is controlled by the specific systems of oppression your characters want to escape. Town is dangerous. It's somewhere you venture into for potential rewards - food, equipment, etc - but don't stay too long because of the risks.
The dungeon is kind of the opposite, really. It's a space where the rules of Man don't really reach, a marginal space outside of their control. That's not to say that it's entirely safe, but it's certainly safer. You descend into the darkness, and the darkness embraces you, and you can be yourself.
So, in a way, the dungeon becomes an inherently queer space. One where you can find others like yourself, where you can be yourself. And this comes with its own risks, but when it comes down to it you're welcome in the dungeon in ways that you aren't on the surface. Heck, a good proportion of the encounters you'll find down there are other bitches like yourself, or creatures that were once bitches like you but which have slowly transitioned into being something else, something unique. There are communities in the dungeon. Rough, harsh, communities, often very weird ones, but there's a space for you. 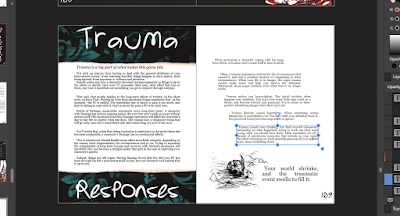 So all of these elements come together to create a game where the shared experience of marginalisation brings people together. Your characters can no longer stay in mainstream society, so they find others like themselves and form their own little communities. Insular, tangled, fucked up communities, but still. Trauma hurts, and the scars it leaves can cause problems a long way down the line. But that shared experience pulls you together.

Ultimately, I think the game's hopeful. It says that you can be there for each other, can support each other through your pain to find a place in the world, to be yourself. It's angry, defiant, burning with this idea that together we can make a better future, despite what we've been through.
What's that phrase? "Not gay as in happy, but queer as in fuck you." The game's fucking queer. 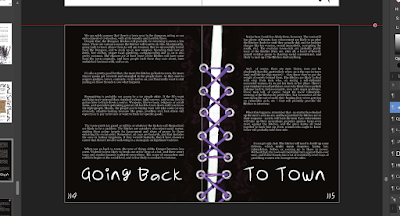 But. I'm being arty and sentimental. Where are things in practical terms?
Well. We have a mostly done manuscript. It's just a matter of finishing the art and layout, getting it properly edited and proofread. Then it can get released properly.
Which is why I'm pleased to announce that
the game's getting kickstarted in January.
There's a team of three of us on this: Myself, Sarah doing art, and Khan doing editing.

So, that's something to look forward to. I know I'm excited. 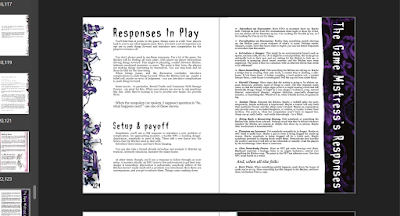 Finally, I wanna take a moment to thank the various people that have helped me get this project where it is. Playtesters and collaborators and sounding boards, y'all have been wonderful.
Thank you, I love you all.