Six new classes for Mork Borg, all of them dead girls. A bit WiP. Come with seperate equipment tables, which aren't done yet. Some CWs for roofies. 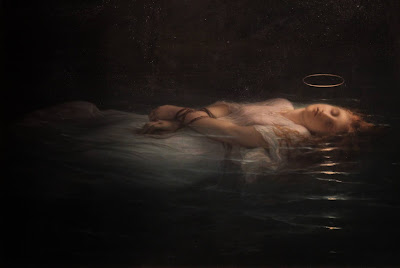 You were drained of blood by some vampiric predator, the life stolen from you, and leſt for dead.
Now you rise, a pallid bloodless thing. And you’re so, so hungry.

D4 Omens, d10 + Toughness HP.
Roll 3d6-2 for Agility, you’re lethargic and pale. Roll 3d6+1 for Presence
and Strength, your bloodless body is supprisingly vital.
Start with d6x10S, roll a d2 for Armour and a d6 for Weapons.

You have a Bite attack that you can make instead of attacking normally.
When you do, d4 damage. Roll a d4 for the additional effect your Bite always has:
1: roll DC 15 Presence. If you succeed, the victim obeys a hypnotic command you give.
2: you drain blood and other vital fluids. Heal by the amount of damage done.
3: Victim swoons helplessly for as many rounds as the bite’s damage.
4: Entrancing effect. +1 Presence against your victim, cumulative, forever.
You may spend an Omen to have your Bite do another of these things as well: pick which when you do.

The Sacrificial Waif
You were picked out from the teeming masses of humanity. Told you were special. Plied with fine wine and other intoxicants. Adorned with beautiful ceremonial clothes, anointed with oil and paint.
Then killed as an offering to something inhuman, your life snuffed out early.

Roll a d2 for armour, d6 for Weapons. Begin with 2d6x10 S.
Your skin is painted or tatood with holy markings. Treat your skin as a random Sacred Scroll.

Your blood carries the power of the various herbs and alchemies they plied you with. Daily, you can use your body as an undead alchemical crucible, distilling the drugs in your blood and syphoning some off.
You can produce d4 doses each day. Roll a d8 twice for what you know how to make. As well as their listed effects, all the drugs you produce have a euphoric effect.
1: Nepenthe Oil. Ingested or by contact. Victim makes a DC 16 Toughness roll or falls asleep.
2: Purifying Balm. Restores health. Ends Infection, +1 Presence for an hour.
3: Elixir Imortalis. Removes all fear of death, brings it near. Double all damage dealt and taken for an hour. Immune to Morale.
4: Xhat. Heals d6. Removes all scars and blemishes.
5: Liquid Peace. Ingested. Anybody who puts it in their mouth and swallows dies, instantly, no save no second chance.
6: Thanazine. Revives a sleeping, unconcious, comatose or Torpid character instantly, they heal d4 HP and regain an Omen.
7: Blank Slate. Ingested. Victim becomes disoriented and suggestible.
8: Black Moon Powder. Rubbed into the skin, dealing d2 damage. User rolls to use scrolls at -4 difficulty.
When you improve, you roll another drug and learn how to make it. A duplicate result means you learn nothing.

You never hurt anybody. Far from it, your practices were - a far as you’re concerned - perfectly benevolent. They burned you for it anyway. You died on the pyre, trying to scream for mercy with flame-ruined lungs. Now you’re back, you’re far less inclined to pity.

D2 Omens, D6+Toughness HP. Roll weapons with a d4. D6x10 S. You’re burned and ruined. Roll Presence and Agility on 3d6-2. However, your carcass has an occult might to it, nearly unstoppable. Roll Strength on 3d6+2. You begin with a random Unclean Scroll, and roll to use Scrolls with Strength. The fire gave you gifts. Roll a pair of d8s for what. 1: You can spit bolts of flame. Roll to hit with presence as normal, each bolt does d4 damage, and d4 damage each r0und until they put the fire out. 2: You are immune to fire, and cannot be hurt by it. 3: You can cause yourself to combust, covering yourself in flickering flames. D2 damage to anybody you attack or who attacks you up close. 4: When you look into a campfire, the flames show you odd truths. DC10 Presence and an evening’s concentration; if you pass, you get to ask a single yes/no question and get a truthful answer. 5: Things you burn - with supernatural or mundane fire - are utterly destroyed and forgotten. Records of them vanish, all traces of their existence fade away. 6: Your fires - either supernatural or mundane - illuminate more than they should. In the area lit by them, it is impossible to hide, and invisible things are revealed. 7: If you set somebody on fire, they fall under your thrall. You may set them a task; the fire does no damage so long as they obey. Shirk, and the fire does d4 damage a round. 8: You can cause even slight flames to flare into dangerous fireballs. D12 damage to anybody caught in the blast. For everybody killed by the fireball, you heal 1 HP.

You had such plans. You were going run away, see the world, fall in love. Your life was going to be so beautiful. But when you set out, all that was waiting for you was a knife in the dark and a cold, shallow grave.

There’s something weirdly compelling about your delicate corpse. Roll Presence with 3d6+2, Strength and Toughness with 3d6-1.
You begin with d6x10 S. Roll weapons and armour normally.

Name the person who hurt you most; you always know the rough direction and distance to him.

You are almost inescapable. Roll a d8 for how.
1: You can walk up walls on your feet and fingertips like a lizard.
2: You cannot be grabbed, pinned, tied up, or otherwise restrained; you always break free effortlessly.
3: Once you’ve got somebody’s scent, you always know the rough direction and distance to them, forever.
4: You can walk through walls as if they weren’t there.
5: You can walk on water.
6: You blend into your surroundings. Regardless of the circumstances, you roll to Hide at DC 8.
7: You can transfix others with your gaze. To do so, roll Presence at DC 12, if you succeed your victim cannot willingly break eye-contact or move away from you.
8: When you scream or sob, the sound renders those who hear it helpless. Roll dc 16 Presence, if you pass listeners are paralysed for a round.

You had power, or influence, or status, or just an inhereted title lined up. The details hardly matter anymore. Whatever it was, you were in somebody’s way, and they had you discretely removed.
Now, stripped of your wealth, finery and titles, you’ve clawed your way out of your lonely grave, and you want what they took from you back.

D4 Omens, d6+Toughness HP.
Roll Armour on a d2. Roll 3d6x10 for starting cash.
Despite everything, you carry yourself well, with an air of command that belies your frail form. Roll Presence on 3d6+2, Strength an Toughness on 3d6-2.

Name the monarch from whose blood you hail. You get +2 to all rolls against them, their bloodline, and beings in their service.

You’ve managed to retain something at least. Some token of your former life went into that grave with you: fine clothes (worth another d6x10 S if you stoop to selling them) and roll a d6 for what else.
1) A diplomat’s guide to translation. All rolls to translate, understand, or communicate in other languages are DC 8. Always sounds a little posh.
2) A rod of correction. A weapon that does d4 damage, or d12 to any target that has ever disobeyed an order you gave them.
3) A radient coronet, that can - at your command - create or suppress light, to even to blinding levels. When you have it active, your difficulty for attacks is 16 and for defence is 8.
4) A gourmet’s ring that makes you immune to toxins, poisons etc. Presumably, they killed you some other way.
5) A pen of office. Contracts written with it are supernaturally enforced; if a signatory breaks their side of the bargain, you instantly know and can punish them from a distance, dealing d2 damage each round you torment them.
6) A protective veil. Those who strike you with violent force find their bodies wracked with matching sympathetic injuries (taking half the damage you did). Doesn’t protect you from those related by blood, as you discovered.

Well, you had oppinions. Bold and unpopular ones you were outspoken about. It didn’t work out so well for you. When you refused to recant, it turns out society has ways to shut people like you up for goood.

D4 Omens. d6+Toughness HP. D6x10 S. Roll Weapons with a d6.   You are a natural survivor. Roll Toughness on 3d6+1. Your ruined face makes you less than compelling. Roll Presence on 3d6-2.

You came back from the grave different. Strangely altered by supernatural forces that took an interest in you. Roll a d8 for how.
1:    Once per day you can make a Prophecy. State something significant, interesting or weird that you believe will happen:  when it does, regain all your Omens.
2:    Can talk to carrion-feeders and scavenging animals - crows, hyenas, maggots - in their own tongue, and understand their words. +3 to Presence rolls to pursuade or understand them.
3:    You can spit teeth. Each does d6 damage, and rolls to hit with Strength. You have 32-d4 teeth in total. You can spit multiple at once.
4:    Your kiss is venom. D12 damage to anyody who meets your lips, with no roll to avoid it.
5:    Your blood rusts what it touches. Any metal weapon that damages you is corroded, doing half damage the first time, and useless the second.
6:    You can read people’s fortunes. When you do, pick a dice size (IE d6, d20, etc) and roll it, noting down the result. Wen she would roll a dice of the same size or have a dice of that size rolled against her, she can substitute in the noted result instead of rolling, using it up. Somebody can only have one predicted fortune at once.
7:    You see glimpses of your doom coming down upon you. Whenever you would go Torpid, before you do you get to make a Prophecy (see option 1) or read a Fortune (see option 6).
8:    Once per victim, you can predict their eventual demise. Your prediction must be specific and unexpected. +7 to all rolls (including damage rolls) that would bring that partiular demise closer.
When you first improve, roll a second such ability. The second time you improve, and thereafter, you may re-roll one or both abilities.